Sectoral integration ‘on the cheap’ with cash based programming

Holly Welcome Radice has worked for 15 years in food security programming in Africa and Latin America. She was the Head of Food Security and Livelihoods for Save the Children’s Somalia/Somaliland country programme from 2011 to early 2014.

The author would like to thank the Save the Children Somalia/Somaliland education, child protections and Puntland Food Security and Livelihoods teams, as their tireless implementation of the work contributed to this article.

What we know: Many agencies strive to implement integrated multi-sectoral programming. In practice, this is difficult to achieve.

What this article adds: Using cash based programme as the aid modality, Save the Children Somalia has achieved education impact in a food security programme, food security impact through an education initiative, and livelihoods impact targeted through a child protection project. Well planned cash based programming enables beneficiary-led, multi-sectoral integration, and reduces the agency administrative burden to achieve this.

Integration of different sectors into one programme seems the obvious answer to meet diverse needs faced by households in humanitarian crisis. But integrated programmes often happen more in theory and less in practice. Multi-sectoral projects, with activities running side by side, are the norm rather than situations where needy households can have more than one of their needs addressed within the same humanitarian project. While integrated programmes might suggest greater overall efficiency, there is little evidence to support or dispel this hypothesis1. 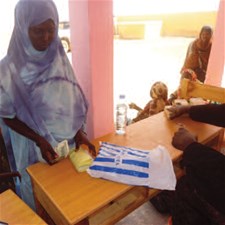 Furthermore, by design, funding constraints or the need to balance work across geographic areas, practical sectoral integration is often not achieved. Cash based programming (CBP), however, does lend itself very easily to “hidden” integration effected through one modality. Save The Children Somalia/Somaliland has seen that CBP is one easy way to integrate sector objectives and shares some experiences in this article.

Save the Children has been implementing CBP in Somalia since 2005. A variety of CBP modalities have been used including:

The diversity of delivery modalities is overshadowed by the fact that the CBP has almost exclusively been implemented in the food security and livelihood sector. This is not unique to Save the Children or Somalia but is a common feature in many countries. Given that Save the Children’s country programme has seven sectors, integration seems like a natural objective, but has been met with only partial success. However, monitoring data shows that CBP has significantly contributed to other sectors and fostered integration as an unintended, positive benefit.

An emergency education project in Galgaduud, Central Somalia used food vouchers, which contributed to household food security, as an incentive for school attendance of children. Children enrolled in 24 Save the Children supported schools were required to reach a minimum of 85% attendance over three months for his/her household to qualify for the vouchers. All 3,176 students (1,975 households) qualified for the one-off voucher scheme. The intervention supported approximately 17% of the learners enrolled in the region3. Some 27 villages were represented in this activity including six internally displaced population (IDP) areas. Exact commodities for voucher exchange were decided at the local level through community educational committees. Local businesses were then selected to provide the supplies through a reimbursable voucher to Save the Children.

The food vouchers were distributed during a critical period - the long hunger gap. The value was designed to meet 30% of the food part of the Minimum Expenditure Basket (MEB)4 for Galgaduud Region. According to the registration data, nearly 50% of the students were from the same households; therefore nearly half of the households received 60% of the food portion of the MEB. The food received through the vouchers scheme lasted for 35 meals on average or approximately 17 days5.

In response to the 2011 crisis in Somalia, Save the Children implemented an emergency project in the remote district of Ishkushaban, Puntland. The objective was that targeted households would improve their access to basic food and non-food needs.

One activity in the project provided unconditional cash transfers to 333 drought affected households (1,888 people). The three villages were selected based on their vulnerability (e.g. severity of drought, number of IDPs and destitute pastoralists), connection to functional markets, and presence or non-presence of other actors. Sensitisation and beneficiary selection was undertaken with guidance for local authorities and village elders and ultimately village relief committees. The latter group was charged with the actual selection of potential households based on criteria jointly agreed upon by the communities and Save the Children field staff.

Community lists of potential beneficiaries were later verified through visits to a sample of recommended households by Save the Children staff. In addition, the lists were read publically at village based meetings with beneficiaries and non-beneficiaries, where communities were able to verify the eligibility of selected households.

Each household received US$85 for six consecutive months using hawalas. This amount corresponded to an average of 45% of the full MEB for Bari Region with considerable variation over the six months (48-63%) as market prices changed significantly during the period.

While the activity was aimed at promoting food security, the beneficiaries dictated their priorities. Throughout the distribution period, an average of 18% of the grant was used for school fees - second only to food expenditures. Between 70-90% of the households claimed to use part of the grant for education expenses. The beneficiaries demonstrated through their choices that underlying causes of vulnerability (in this case, lack of education) can be addressed in a humanitarian intervention without detracting from the original food security objectives.

An external evaluation confirmed the importance communities put on the use of cash relief for education. The headmaster of one of the villages stated:

“This project is good. It has helped mothers to pay the tuition fee on time. As a result of this project, the number of school enrolments were increased and fee defaulting reduced.”8

CBP can indirectly have positive child protection outcomes9. In urban Hargeisa in Somaliland, Save the Children launched a livelihoods cash grant activity through a child protection project. The project is based in three IDP settlements in Hargeisa and targets approximately 140 households with one off cash grants for livelihood / income generating activities received via hawalas. Grants have varied depending on the enterprise proposed by the household and ranged from US$250-400. Prior to receiving the grants, households received a short business training.

Beneficiary households were targeted from the overall beneficiaries already receiving child protection support from Save the Children and its partners. From this pool of potential beneficiaries, Save the Children and its partners worked with community level groups to further identify households that were likely to have positive child protection outcomes from the grant and had earning capacity, among other criteria.

Monitoring from the pilot phase showed an immediate positive impact, with at risk children being enrolled in school, eating more meals a day and no longer being sent to beg or work for the family.

Integration through modalities instead of standalone activities

Most non-governmental organisations (NGOs) now strive to implement integrated multi-sectoral programming; perhaps the means to do so is by changing the approach and modality. Because of CBP’s inherent flexibility, households can decide on priority spends for cash, which inevitably span across the many needs that they have. Truly integrated projects or programmes may be practically difficult to achieve on the ground. Save the Children’s experience shows that a well-planned CBP activity may foster integration led by beneficiaries with no additional need for administrative direction.

2Private money transfer systems that are very common in Somalia. They are used in a context that lacks a formal banking system.

4The Food Security & Nutrition Analysis Unit in FAO Somalia developed the minimum expenditure basket (MEB), consisting of minimum quantities of essential and basic food and non-food items. It represents a minimum set of basic food items comprising 2,100 kilocalories/person/day for a household of 6–7 and non-food items such as such as water, kerosene, firewood, soap and cereal grinding costs. It is monitored monthly for all regions of Somalia. The food part of the MEB is approximately 70% on average.

5Based on baseline data of an average of two meals per day.

9Cash and child protection. Save the Children. 2012.

5.1 Introduction The provision of cash as an emergency response has the potential to impact on all elements of the livelihoods framework by providing the means to protect or...

FEX: Bottleneck analysis for the integrated management of acute malnutrition services in Somalia

Summary of research1 Location: Global What we know: Cash transfer programmes (CTPs) have a proven impact on poverty reduction and social protection but their overall impact...

By Leo Anesu Matunga and Anne Bush Leo Matunga is currently the nutrition cluster coordinator for Somalia. He has over 12 years experience working in nutrition in emergencies...

FEX: Use of cash in the tsunami response

As part of its Cash Learning Project, the Humanitarian Policy Group (HPG) at the Overseas Development Institute (ODI) is undertaking research into the use of cash in the...

FEX: Cash and Vouchers in Emergencies

Summary of published paper1 Women have not been found to be disadvantaged by cash for work programmes A recently published discussion paper examines the use of cash and...

Summary of evaluation1 Evaluation headlines: Levels of food insecurity and associated anaemia are high amongst Columbian refugees and poor Ecuadorians in the northern...

FEX: What affects the cost of delivering cash transfers in humanitarian settings?

By Clare O'Brien and Fidelis Hove Clare O'Brien is a senior consultant in the Poverty and Social Protection team at Oxford Policy Management, a development...

FEX: Use of cash vouchers in tropical storm emergency response in the Philippines

By Nashrudin Modin and Demosthenes Militante Nashrudin Modin has worked in the Philippines mission of ACF International since 2005, under the Food Security and Livelihoods...

FEX: Study on hygiene practices and market chain of milk and milk products in Somalia

By Susan Momanyi and Andreas Jenet Susan Momanyi joined Vétérinaires Sans Frontières (VSF) as a nutritionist in 2009 and has been working with fresh food vouchers in South...

3.1 Livelihoods assessment and analysis in emergencies The livelihoods framework provides a tool for analysing people's livelihoods and the impact of specific threats or shocks...

View this article as a pdf Tammam Ahmed is a Nutrition Specialist at Save the Children International Main Chowdhury is Director of Programme, Development, and Quality at Save...

FEX: DRC experiences of cash assistance to non-camp refugees in Lebanon and Turkey

By Louisa Seferis Louisa is the MENA Regional Livelihoods & Cash Advisor for the Danish Refugee Council (DRC). She has worked for three years with the DRC for the Syrian...

Editorial note: As discussed in the editorial of this issue of Field Exchange, there is a lack of clarity and resulting confusion as to what actually constitutes a...

By Rosie Jackson Rosie Jackson currently works for Save the Children UK as an Emergency Food Security & Livelihoods Advisor. Based in London, she provides technical support to...

Men at work on gulley control in CFW programme in Somalia In a food crisis, distributing cash in a targeted manner can often meet people's immediate needs more quickly and...

Sophia Dunn, Oxfam GB Coir mill Following the devastating tsunami in the Indian Ocean on 26th December 2005, Oxfam GB scaled up its activities in Sri Lanka and opened an...

FEX: Lessons on Cash for Work in Somalia

FEX: 2011 famine in South Somalia: the role of the early warning information System