A single coverage estimator for use in SQUEAC, SLEAC, and other CMAM coverage assessments

This article has been prompted by the number of support requests received from SQUEAC and SLEAC practitioners regarding the two different estimators of coverage (i.e. point coverage and period coverage, see definitions below) in current use. Both of these estimators can be calculated using data from any of the currently used coverage assessment methods (i.e. CSAS, SQUEAC, SLEAC, S3M) but often produce very different results. The SQUEAC and SLEAC technical reference encourages investigators to select and report only the most appropriate estimator, with the choice of the most appropriate estimator being informed by the context:

Selection of the most appropriate coverage estimator for a programme has proved difficult in multi-district (e.g. national) SLEAC surveys. It is unlikely that one estimator is appropriate for all sub-programmes, and collecting the contextual information needed to select the estimator appropriate to each sub-programme may not be feasible. Even when contextual information is collected, the use of different estimators makes it difficult to make between sub-programme comparisons. Reporting both point and period coverage estimates is a potential solution but this tends to confuse policy makers and has, on occasion, generated resistance to survey results.

This article presents a new single coverage estimator that does not require new survey tools to be developed and tested and can be used with current survey tools and data from previous coverage surveys so as to ensure continuity and comparability.

The two coverage estimators in current use are calculated as follows:

Cout    =    Current SAM cases not in the programme

These and other factors often interact with each other in complex ways (see Figure 1).

The two coverage estimators in current use focus on case-finding, recruitment, and retention:

Rout    =    Recovering SAM cases not in the programme

The problem with this estimator is that Rout (i.e. the number of recovering cases that are not in the programme) is unknown and may be difficult to collect accurately. A survey might (e.g.) find a moderate acute malnutrition (MAM) case that was not in the programme but it would not be easy to ascertain, except in the case of a defaulter, whether this case had previously been a SAM case and was now a recovering SAM case. Also, we know that the active and adaptive case-finding procedure used in many CMAM coverage surveys is optimally biased to find SAM cases not MAM cases. It could be argued that the MAM cases that we do find using active and adaptive case-finding are likely to be recovering SAM cases. This assumption would not, however, be tenable with house-to-house and door-to-door screening which is often used when case-finding in urban and camp settings. The situation may, however, be complicated by the presence of nutrition programmes distributing lipid nutrient supplements (LNS) such as NutriButter®, Plumpy'DozTM, or Plumpy'SupTM. Despite these complications it may be possible to create a simple instrument to divide MAM cases into “MAM never SAM” and “MAM previously SAM”. Such an instrument need only be accurate “on-average”.

It may also be possible to address the problem of estimating the number of recovering cases not in the programme (Rout) using a simple mathematical model. This article explores the latter approach. The advantage of this approach is that the single coverage estimator could be applied to data from previous coverage surveys allowing comparability of coverage estimates over time and would require no changes to be made to existing methods and tools.

If we assume that incidence and coverage do not change very rapidly over time (i.e. little or no change over a period of less than about two months) then we can also assume that:

where k is a correction factor (more on this below).

To avoid having a division by zero in the case of a survey finding no current SAM cases in the programme being assessed we would use:

Fractions of cases can be removed by rounding to the nearest whole number using simple truncation (i.e. rounding towards zero): 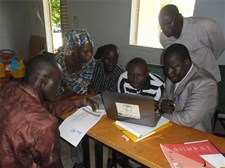 To illustrate this process we will apply our model to some familiar example data (see Table 1).

* The estimator indicated as being the most appropriate by analysis of SQUEAC data.

We would use the process illustrated in Table 1 with data from simple coverage estimation surveys using (e.g.) the CSAS or S3M survey designs.

* The denominator for the single coverage estimator. The data and calculations for each n are shown in Table 1.

Using the single coverage estimator in final-stage SQUEAC surveys requires specifying the numerator and denominator of the single coverage estimator as the likelihood (survey) data. Figure 2, for example, shows a Bayesian beta-binomial conjugate analysis performed using the BayesSQUEAC calculator with data from the first example in Table 1 with a Beta(14, 8) prior. In this case the numerator is:

and the denominator is: 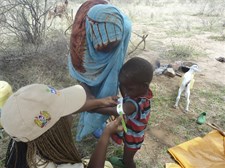 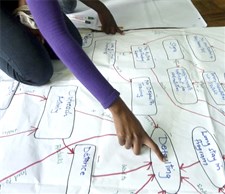 The proposed single coverage estimator provides a measure of overall programme performance with respect to coverage which has face validity, corrects the biases of the point and period coverage estimators, can be applied to data from previous coverage surveys, and requires no change to existing coverage assessment methods and tools. 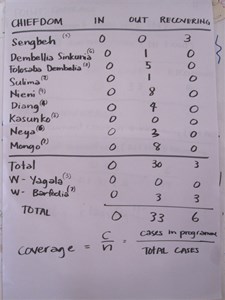 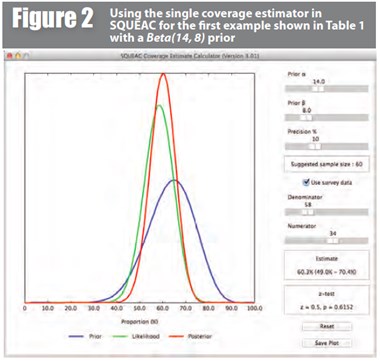 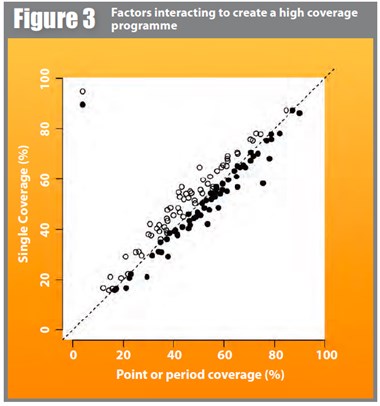 en-net: Use of single coverage estimator with expanded OTP protocol

In the Cox's Bazar refugee settlements, nutrition sector partners are using an expanded protocol for OTP. Children are admitted to OTP based on regular international...

Dear community, Does anybody know about using single coverage for MAM? I guess length of an untreated case and duration of stay would need to be appropriate for MAM. We...

Dear all We often conduct exhaustive MUAC screening and we calculate coverage for SAM and MAM using a simple formula which divides the number of children with SAM (or MAM) who...

I have just been looking at the formulae for coverage assessment, which defines the coverage as: No. of SAM cases in treatment + No. of recovering cases in...

FEX: Is there a systematic bias in estimates of programme coverage returned by SQUEAC coverage assessments?

View this article as a pdf Lisez cet article en français ici By Mark Myatt and Ernest Gueverra Mark Myatt is a consultant epidemiologist. His areas of expertise...

By Ernest Guevarra, Saul Guerrero and Mark Myatt Ernest Guevarra leads Valid International's coverage assessment team. He has formal training as a physician and a public...

Hello Everyone, Could someone help me understand why in the circumstance described below we consider the child in the "recovering case group" while conducting a SQUEAC...

By Tamsin Walters, en-net moderator Forty-seven questions were posted on en-net in the three months August to October 2012 inclusive, eliciting 152 replies. In addition, 18...

By Ernest Guevarra, Saul Guerrero, and Mark Myatt Ernest Guevarra leads Valid International's coverage assessment team. He has formal training as a physician and a public...

I'm currently training some folks on how to calculate expected CMAM caseload using the (prevalence + incidence) * coverage equation. I'm having difficulty explaining to my team...

en-net: Real and theoretical coverage of a nutrition program

Hello colleagues, I would like to know the definition of the actual and theoretical coverage of a nutrition program and how they are measured. Thank you Dear Mark and...

FEX: How many lives do our CMAM programmes save? A sampling-based approach to estimating the number of deaths averted by the Nigerian CMAM programme

From Caroline Muthiga: We conducted a rapid assessment recently using MUAC and measured 120 children. We found 13 children with a MUAC of 12.5. Is there a way to get a proxy...

I'm trying to learn more about CSAS, but can only find summary or simple documents. Does anyone know where there is a proper, detailed manual on CSAS? That does help. Thanks...

By Ruwan Ratnayake, Casie Tesfai and Mark Myatt Ruwan Ratnayake is the Epidemiology Technical Advisor with the International Rescue Committee based in New York. He supports...

By Mark Myatt This article gives an overview of the coverage estimation method developed for the Community Therapeutic Care (CTC) Research Programme in Malawi1. Coverage is...

Unfortunately, our nutrition program fall under three livelihood area. The total program catchment population is about 120,000. The proportion of population in the three...

Hi, We are planning to conduct SQUEAC investigation of CMAM program which is about to end in Dec 2016. Last SQUEAC survey was conducted in 2015 for which the results are Point...

FEX: Estimating the burden of wasting during COVID-19 based on empirical experiences in the Sahel

FEX: Is there a systematic bias in estimates of programme coverage returned by SQUEAC coverage assessments?

Lisez cet article en français ici This is a poscript for research article 'Is there a systematic bias in estimates of programme coverage returned by SQUEAC coverage...