The Coverage Project: a national partnership for evaluating CMAM services in Nigeria

Maureen Gallagher is the Senior Nutrition & Health Advisor Action Against Hunger US based in New York.  She is a public health specialist with an MSc in Social Policy and Planning specialising in health policy. She has been working in nutrition programming for the last 15 years in Niger, East Timor, Uganda, Chad, DRC, Burma, Sudan and Nigeria.

Saul Guerrero is Director of Operations at Action Against Hunger (ACFUK). Prior to joining ACF, he worked for Valid International Ltd. in the research, development and roll-out of CTC/CMAM. He has worked in over 20 countries in Africa and Asia.

Ifeanyi Maduanusi is a Programme Quality and Accountability Technical Advisor for Action Against Hunger in Nigeria. He led the implementation of most the SQUEACs while he worked as CMAM Deputy Programme Manager for the Coverage Project

Diego Macías is a Learning Officer for ACF, working on learning outcomes from coverage programmes, including data analysis and qualitative assessments.

The authors would like to thank the participating Federal and States’ authorities, health workers and communities for their commitment to CMAM, support and active participation throughout the Coverage Project. Thanks also to the Coverage Monitoring Network for their technical support. Thank you to UNICEF, Save the Children, Valid International and Centre for Communications Programme in Nigeria for their collaboration as partners of the consortium.  The authors would like to acknowledge the contribution of the Children’s Investment Fund Foundation (CIFF) for their support to the Coverage Project and CMAM in Nigeria.

The Severe Acute Malnutrition (SAM) burden in Nigeria is known to be amongst the highest in the world, with over 10% of the global burden, resulting in an estimated 2 million children affected. Since 2009, the Government of Nigeria, with the support of UNICEF, started tackling the problem by piloting Community-based Management of Acute Malnutrition (CMAM) in two Local Government Areas (LGAs), one in Kebbi State and the other in Gombe State. Since then, Nigeria has proven their strong commitment to the fight against SAM, with geographical coverage extending to 91 LGAs in 11 states of the country, including 642 health facilities, as presented in Figure 1.  This has also been possible as partners and donors have supported federal and state Ministries of Health (MoH) to institutionalise SAM management as part of regular routine health services. More than 1,000,000 children received treatment between 2009 and mid-2015.1 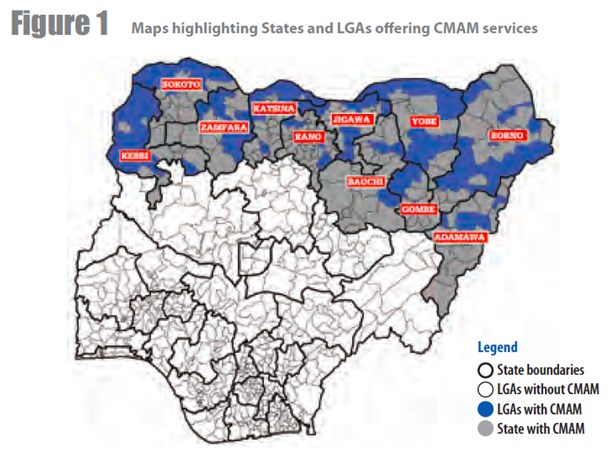 A large component of this scale up has been possible due to a strong partnership launched between the Children’s Investment Fund Foundation (CIFF), UNICEF and the Government of Nigeria (GoN) in 2013 (see article in this issue of Field Exchange). This also generated the opportunity for comprehensive evaluation and learning about progressively scaling up CMAM services. As a result, another partnership - for assessment and learning of coverage - was formed. ACF, Save the Children and Valid International worked together with UNICEF and MoH to design the Coverage Project, a collaboration in support of evaluation of SAM services funded by CIFF. The project included two key components: 1) Assessment of coverage and 2) Community Mobilisation Pilot Project.  The findings, recommendations and lessons learned from the project were brought together in a Learning Review document.2 Both project components were undertaken in close consultation and collaboration with the MoH and UNICEF.

The Coverage Project in Nigeria

The Assessment of Coverage component was implemented in two phases.  First, a SLEAC3 was conducted by Valid International to classify coverage of 71 of the 91 LGAs implementing CMAM programming between October 2013 and March 2014, providing an overall picture of the coverage levels of CMAM throughout a high proportion of LGAs. The SLEAC offered a clear view on both the geographical and the direct coverage of CMAM in the region, identifying regions, especially in the northwest, where efforts were needed most. The results are presented in Figure 2. 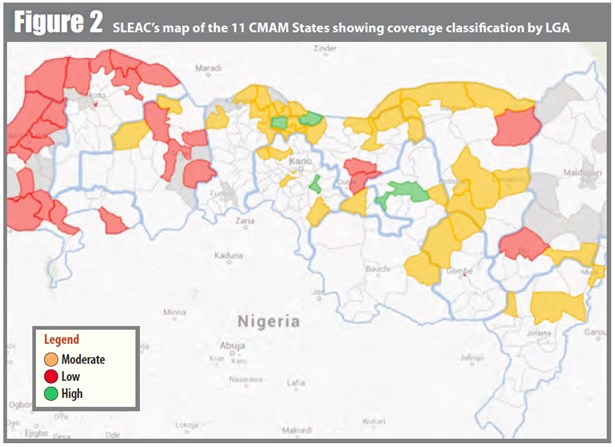 A national workshop was held with key stakeholders to review findings and identify locations for the second phase of this component. More in depth information on coverage was obtained through 12 Semi Quantitative Evaluation and Access of Coverage (SQUEAC) surveys which were implemented by ACF and Save the Children, with support of the Coverage Monitoring Network (CMN) and Valid International. A practical training was conducted in March 2014, when the first survey was jointly done. Then, Save the Children conducted five surveys in the northwest and ACF conducted six surveys in the northeast.  All surveys were completed by December 2015. Key findings of the more in depth analysis provided by the SQUEACs on barriers to access are presented in Figure 3. 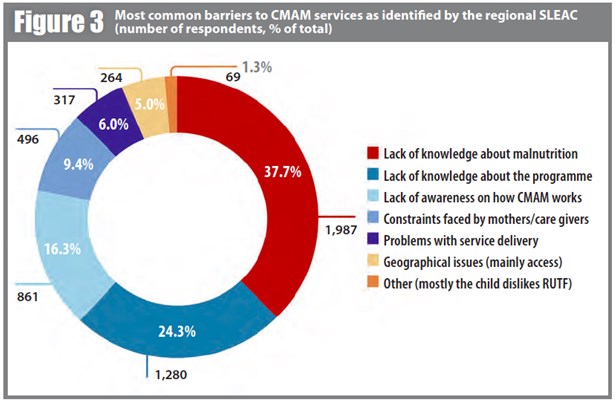 Based on SLEAC and SQUEAC findings, which clearly revealed the lack of awareness about SAM and of services available as common barriers to access across states, the Community Mobilisation Pilot Project was developed in partnership with the Centre for Communication Programmes Nigeria (CCPN) in June 2014. The pilot approach for a sensitisation campaign was developed and tested in two LGAs in Sokoto State – Goronyo and Sokoto South LGAs (both had SLEACs conducted  in November 2013 and one SQUEAC was conducted in Goronyo in March 2014). The choice of State and LGAs was discussed and agreed between ACF, Save the Children and UNICEF based on common criteria. UNICEF then supported the visit and introduction of CCPN to Sokoto State. Workshops were held with key stakeholders in the State to explain the goals of the initiative and engage participants in the design of the awareness strategy and tools. The campaign was implemented by Hikima Community Mobilisation and Development Initiative (HCOMDI), a local grassroots organisation. During the four months of the campaign (October 2014 - Jan 2015), over 110 community dialogues, 300 household visits and active case-finding activities were delivered with the support of community volunteers and involvement of key stakeholders of the outreach area; about 32,000 people are estimated to have been reached during the campaign. In order to measure the impact of the approach and compare it between LGAs, end line SQUEACs were conducted in both LGAs in February 2015. The results of the pilot project are presented in Box 1.

A final workshop was held mid-March 2015 in order to present the SQUEAC and pilot project results, as well as to engage key stakeholders on next steps and recommendations in order to strengthen key findings.  Directors of Primary Health Care (PHC), State Nutrition Officers (SNO) from the 11 states and FMOH Nutrition Department members attended the workshop and shaped key recommended actions.  A summary of actions proposed by the Directors, SNOs, and other partners to tackle the key challenges revealed by the coverage assessments is presented in Box 2.

2) Resource learning to institutionalise CMAM and scale up

Lessons learned for SAM scale up in Nigeria

The Learning Review - SAM Management in Nigeria: Challenges, Lessons  & the Road Ahead5 - outlines the current state of SAM in Nigeria, provides the detailed in depth analysis and results of the coverage assessment, the outcomes of the pilot project and the recommendations for improving SAM in Nigeria. It was revised and agreed on by all partners of the project. Some of the key lessons learned from the Coverage project, pulled together from multiple streams – including the comprehensive SAM context analysis, coverage assessments, pilot project and workshop inputs – and reflected in the learning review are outlined below.

The Coverage project and a key output in the form a learning review has been a positive joint partner initiative to work in support of the GoN to further advance and succeed in their fight against SAM.  Key next steps will involve close follow-up of application of recommendations and monitoring of coverage for further strengthening CMAM in Nigeria.

1 ACF (2015). SAM Management in Nigeria: Challenges, Lessons & the Road ahead

4 The first programme SQUEAC took place precisely in Goronyo and its coverage estimate was 14.3%. In the SLEAC in late 2013, the LGA had an estimated coverage of 0.5%.

i need to know more about the Goronyo, in sokoto state northerwest of Nigeria result about Cmam coverage which was done April 2014 Dear Hassan, This was a SQUEAC assessment...

FEX: From Pilot to Scale-Up: The CMAM Experience in Nigeria

By Sasha Frankel, Mark Roland and Marty Makinen Sasha Frankel worked for the Results for Development Institute as a Senior Programme Associate focusing on health financing and...

View this article as a pdf Research Snapshot1 High-dose vitamin A supplementation (VAS) for children 6-59 months of age is recommended by the World Health Organization (WHO)...

View this article as a pdf Research snapshot1 Treatment programmes for severe acute malnutrition (SAM) tend to focus on initial recovery with limited evidence on post...

FEX: Measuring coverage at the national level in Mali

FEX: High OTP coverage through the Ministry of Health in Chad

By Casie Tesfai Casie Tesfai is currently the Nutrition Technical Advisor for the International Rescue Committee based in New York. She has 10 years of nutrition experience...

By Ben Allen, Mark Myatt, Nikki Williamson, Danka Pantchova and Hassan Ali Ahmed Ben Allen has been Global Coverage Advisor for Action Against Hunger UK for the past two...

By Lily Schofield, Selome Gizaw Lalcha and Terefe Getachew Lily Schofield has worked in many countries in Africa and Asia as a nutrition consultant. She has been involved in...

Since the start of operations in August 2012, the Coverage Monitoring Network (CMN) has supported a total of 50 coverage assessments, with nine implementing organisations...

I am planning a SQUEAC survey in Haiti. Our PTAs are spread through 5 Communes (Provinces) which are relatively close together. The problem is that in the middle of this 5...