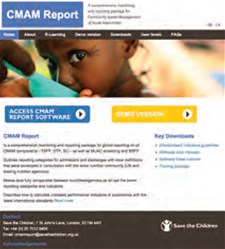 Since the publication of the Humanitarian Practice Network (HPN) Network Paper Measuring the effectiveness of Supplementary Feeding Programmes (SFPs) in emergencies in 20081 highlighted inconsistencies, inadequacies and bias associated with reporting on Supplementary Feeding Programmes (SFP), the idea of standardising community based management of acute malnutrition (CMAM) reporting categories and indicators across implementing agencies and countries has gained traction. This has culminated in the development of a comprehensive reporting system for all aspects of CMAM, which features a web-based central database called the ‘CMAM Report’. This article describes certain experiences and lessons learnt from the development process of this reporting system and its use as a management tool in CMAM programming.

The CMAM Report started out in 2008 as the Minimum Reporting Package (MRP), with the formulation of standardised reporting categories and indicators for SFPs coordinated by a steering committee of twelve international agencies, led by the ENN and Save the Children. These were piloted in four countries. In 2011/12 and in response to the feedback from the pilot, Outpatient Therapeutic Programme (OTP) and Stabilisation Centre (SC) reporting categories and indicators were added through a similar consultative process and a Microsoft AccessTM based reporting software was developed. Both reporting standards and software were subsequently rolled out by seven non-governmental organisations (NGOs) in 15 countries; Save the Children, Concern Worldwide, International Medical Corps (IMC) and GOAL were the main users.

A number of challenges were identified following this first phase in relation to the indicators and the software.  Despite guidance on standardised indicators, these were still not fully adopted, even by agencies committed to the MRP principles. The software appeared not to be user friendly enough. Evaluations and feedback on the software also emphasised the focus on NGO implementation, the lack of capacity for coordination and the potential for parallel systems.  For example, there were concerns that the MRP added another layer of reporting on top of government reporting systems (this was not the intention but rather to  be a complementary initiative, whereby the standardised reporting categories and indicators of the MRP could positively influence government systems in the long run and where systems needed strengthening).

With these issues in mind, a new phase of software development and reorientation took place 2013-15. The software was redesigned into a global web-based database with a specific function for United Nations (UN) agencies and the Ministry of Health (MoH).  Mid upper arm circumference (MUAC) screening and blanket supplementary feeding programme (BSFP) components were added. The system was finally renamed as CMAM Report.

In parallel to the software development, the team at Save the Children facilitated consultations with partners and users, which resulted in a number of changes to the software and the addition of some new components:

With the wider launch to the nutrition community mid-2015, CMAM Report can now be used on computers, laptops and tablets with a common browser4 and is freely available to all agencies/countries that wish to use it. The software supports secure data collection through controlled access from the field via country to headquarters levels (five adaptable user access levels). It enables the use of standardised reporting categories and indicators (enables comparable data and unbiased reporting) and gender and age disaggregated reporting through all reporting categories. Users can analyse data for trends and create summary tables and graphs by feeding site, group of feeding sites and geographical location up to country and global levels for any required time period in one month steps. The system features export of tables and graphs to PDF, Excel and Word. Raw data can be selectively exported to Excel and in turn to statistical software. Data entry mistakes are reduced by real-time validation checks. 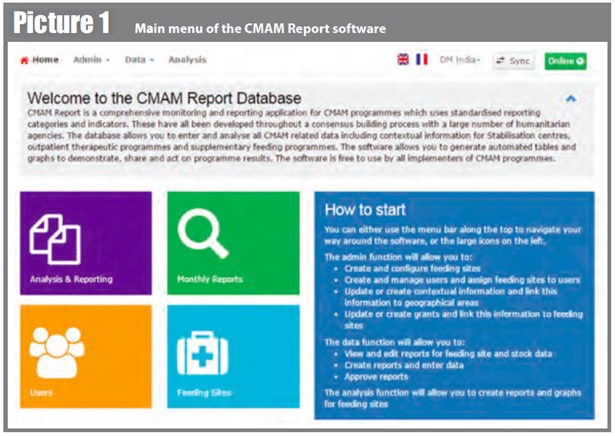 The main challenges in establishing this system have been due to the lengthy time taken to develop complex new software, the unexpected costs of this process and lack of a framework for defining what constitutes a change to the original specification for the new software.

The following lessons can be taken away from the development process:

Several examples of good practice were found by a recent evaluation.

In Yemen, high defaulter rates were revealed and resulted in the management team adapting their programme delivery model. In Asia, a large number of defaulters were revealed due to a supply chain break. The CMAM Report software made this visible and results could be traced back to specific sites (Figure 1). In West Africa, the CMAM Report clearly showed a number of programming issues and therefore where to focus technical support. Stock management is one of the main challenges for CMAM programming and the CMAM Report is particularly effective and useful for  estimating caseloads and supply needs, e.g. in Puntland, Somalia. 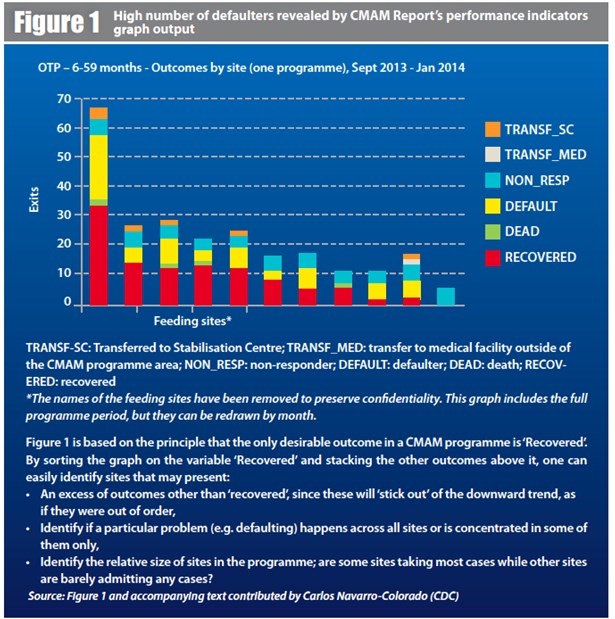 The CMAM Report software replaced Excel sheet reporting; this was prone to errors and had limited use. The Yemen team cited the following as ways in which the CMAM Report has added value to reporting:

CMAM Report has been useful in highlighting issues with data quality across programmes, partly through the standardisation to calculate performance indicators. Using the CMAM Report software, indicators can also be easily compared across programmes and compliance and validation reports have highlighted missing, late and erroneous data. One organisation conducted a global assessment of missing, late and erroneous data during the initial months of CMAM Report implementation and it was observed that data quality improved during that time.

In some contexts, agencies have also entered into discussions with partners, government and UN agencies on using the standardised indicators to inform national reporting systems: 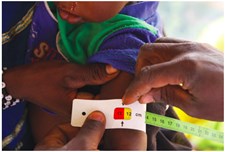 Philippines: Save the Children invited partner staff for training on the CMAM Report indicators and software in Manila in May 2013. Attendees included the Department of Health at the Autonomous Region in Muslim Mindanao, WFP, UNICEF and ACF. Partners identified the CMAM Report as a strong Save the Children system. However, further efforts to de-brand the CMAM Report are required so that external agencies feel comfortable in using the system.  This reflects a constraint in locating a sector-wide initiative within an operational agency; there is risk of less buy-in by others who consider it an agency-specific product.

Yemen: Save the Children and IMC presented the CMAM Report at a cluster meeting and it was well received. In addition, a joint CMAM Report training was conducted in Yemen between IMC and SCUK staff.

West Africa: Agencies are using their own internal databases due to the lack of a strong national system in many countries. There is therefore a need for a regionally standardised CMAM reporting tool which could be met by the CMAM Report software.

The added value of the software reported by users is listed in Box 2.

The software, user manuals, standardised indicator guidelines, e-learning, demo version and more information can all be found at www.cmamreport.com.

For more information and to receive your personal login details, contact: cmamreport@savethechildren.org.uk

2Individual Nutrition Support: A term used for beneficiaries that move from OTP to TSFP and that are kept separate from MAM cases that enter TFSP. This allows unbiased calculation of TSFP performance.

4 Not running on Apple devices

By Emily Mates, Nutrition Advisor, MRP, Save the Children UK The ‘Minimum Reporting Package’ (MRP) has been developed to support standardised data collection for emergency...

In order to evaluate the quality and impact of nutrition interventions, agencies need effective monitoring and reporting systems in place for programmes. A retrospective...

Donor: OFDA Collaborators: Save the Children, Concern and CARE US ENN Project lead: Jeremy Shoham Timeframe: This project was completed in 2011 Background The need for a...

CMAM Report is a comprehensive monitoring and reporting package for global reporting on all CMAM components - TSFP, OTP, SC - as well as MUAC screening and BSFP. Visit the CMAM...

Dear colleagues, The IMAM team in Viet Nam will establish an output monitoring system this year for SAM and MAM management and ideally integrate other key interventions in the...

MRP is a tool that was developed for Supplementary Feeding programmes,I understand its under study,does anyone have experience based on some study on its usage ? Is it user...

SCUK and ENN are looking to recruit up to three Project Officers for an ECHO funded project to roll out a Minimum Reporting Package for the treatment of MAM. The MRP is the...

By Tine Frank, Emily Keane, Natalie Roschnik, Colleen Emary, Melani O'Leary and Laura Snyder View this article as a pdf Tine Frank is a consultant engaged by Save the...

en-net: Vacancies for Save the Children UK / ENN project supporting the introduction of the Minimum Reporting Package for SFPs

Save the Children UK and the ENN are excited to have four positions open (for nutritionists/similiar background with familiarity with SFPs) to lead and run this 18 month ECHO...

Summary of review1 A recent review commissioned by UNICEF set out to develop a global map on the status of Communitybased Management of Acute Malnutrition (CMAM) with a focus...

A child being screened for malnutrition in a UNICEF supported programme By UNICEF Nutrition in Emergencies Unit and Valid International Following the CMAM mapping exercises...

Hello, Any news regarding the Minimum Reporting Package under development by Carlos Navarro ? Someone knows when it will be published? Thank you Hi Elisa Thanks for your...

Hello friends, can anyone tell me what has happened since the Save the Children led CMAM report project finished in 2015? Is it still used?? Thanks Vicky Thanks very much...

By Melody Tondeur and Andrew Seal Melody Tondeur is an ENN Consultant and one of the team members implementing the Anaemia Control, Prevention and Reduction Project, a...

By Lauren Browne Lauren Browne is the Data Manager for the Kwashiorkor Mapping project and joined the team after interning with ACF-UK and Save the Children UK. She completed...

By Aashima Garg, Andrew Rene Bucu and Rene Gerald Garela Aashima Garg is Nutrition Specialist based in UNICEF New York. At the time of writing, she was Nutrition Manager with...