What we know: The current outbreak of ebola virus disease (EVD) centred in West Africa is the largest in history. The full role of food in EVD spread is not well studied.

What this article adds: A recent literature review investigated how food may transmit ebola viruses and how the food system contributes to EVD outbreak and spread. Harvesting and consumption of ‘bushmeat’ is a high-risk activity; food insecurity may lead to more bush-meat harvesting and increase outbreak risk. There is evidence linking ebola to pigs; an outbreak amongst swine would have economic and potential outbreak implications. There is no published literature on the risk of plant food products transferring ebola virus; this would have implications for local and global food systems. Food and the food system may be more implicated in ebola virus transmission than expected; further research is urgently needed.

The current outbreak of ebola virus disease (EVD) centred in West Africa is the largest in history, with nearly ten times more individuals contracting the disease than all previous outbreaks combined. Active transmission was occurring in three countries (Guinea, Liberia and Sierra Leone), and seven additional countries experienced isolated cases. With food systems an integral part of a globalised world, this article investigates the connections that exist between EVD outbreaks and food, describes what is currently known about how food can transmit ebola viruses, and how the food system contributes to EVD outbreak and spread.

The details of human-to-human and zoonotic ebola virus transmission have justifiably received the largest share of research attention and much information exists on these topics. However, although food processing – in the form of slaughtering and preparing wildlife for consumption (referred to as bushmeat) – has been implicated in EVD outbreaks, the full role of food in EVD spread is poorly understood and has been little studied.

The authors conducted a literature review using keyword searches in online databases to assess the current state of knowledge regarding how food can or may transmit ebola viruses and how the food system contributes to EVD outbreak and spread. The authors categorised results of the search into various topics, outlined below. Figure 1 outlines the ways in which food is connected to EVD outbreaks. 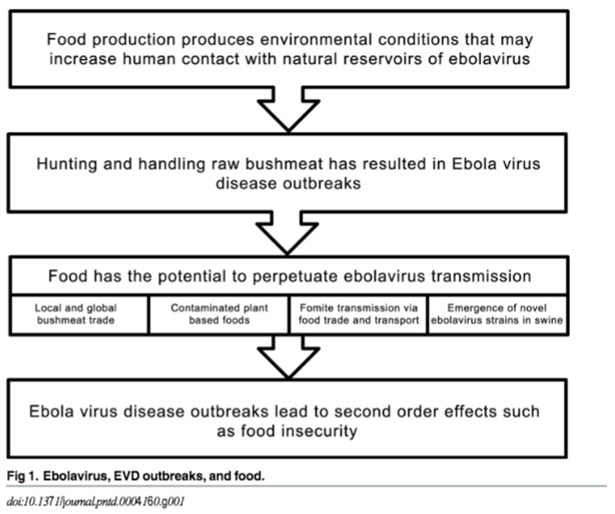 Although the exact nature of animal-to-human transmission of ebola viruses is not often known, the harvesting of bushmeat (including rodents, bats, shrews, duikers and non-human primates) is directly related to ebola virus transmission. The hunting and butchering of bushmeat exposes humans to blood and other fluids of potentially infected animals. In 2014, the Centers for Disease Control and Prevention (CDC) noted that human ebola virus infections have been associated with handling and eating infected animals, with evidence of previous outbreaks of EVD beginning after humans handled infected carcasses of primates and duikers (Rouquet et al, 2005).

While bushmeat harvesting and consumption is a proven high-risk activity, it is an important source of cash income and a food source in West Africa, particularly during times of economic hardship (Leroy et al, 2009). The public health risk from zoonotic pathogens entering countries via infected bushmeat is estimated to be substantial due to widespread smuggling, including into the US and Europe, where demand is high, although exact figures and associated risk are very difficult to establish (European Food Safety Authority, 2014).

It has been hypothesized that livestock could be a possible ebola virus reservoir, but studies to date on horses, sheep, goats, cattle and chickens have been inconclusive. There is, however, evidence linking ebola viruses and pigs, specifically the ‘Reston virus’ (an ebola virus not pathogenic to humans) (e.g. Pan et al, 2014). Recent studies have shown that swine can become infected with ebola virus, develop clinical symptoms and transmit the virus to healthy pigs (Kobinger et al, 2011). In 2012, Weingartl et al determined that infected pigs could transmit the virus to non-human primates. Additional studies in Uganda and the Democratic Republic of the Congo (DRC) have suggested that EVD outbreaks have occurred in areas with high densities of swine (Weingartl et al, 2013) or following large mortality events of swine (Katayi, 2014). If swine are contributing to EVD aetiology, it is a cause for concern in sub-Saharan Africa where swine production is growing, often in areas near to the habitat of bats, who are increasingly being identified as the key ebola virus reservoir (Olival & Hayman, 2014).

There is concern that ebola virus may be transmitted to humans via bat saliva or faeces on fruit such as mangoes or guava. This mechanism has been experimentally verified for the Marburg virus (a member of the Filoviridae family with ebola viruses) (Amman et al, 2015) and the Nipah virus, whose reservoir is also in fruit bats (Luby et al, 2009). It is plausible, therefore, that this mode of transmission may either start  or aid the spread of EVD during outbreaks, although the current lack of knowledge and data make it impossible to quantify the risk (European Food Safety Authority, 2014).

Fomite transmission (transmission of infectious disease by objects) of EVD is possible, although the risks during food harvesting and production are not well understood. There is no published literature on the risk of plant food products serving as fomites in ebola virus transmission, although other viruses are known to be transmitted via food contaminated by food preparers that can subsequently infect individuals after they consume or handle the food, such as hepatitis A (Boone & Gerba, 2007) and Lassa fever, which is closely related to EVD (WHO, 2015).

Fomite transmission depends on virus survival in the environment and studies have shown that the ebola virus is able to survive outside the host (especially at lower temperatures) between several days and over three weeks (Sagripanti et al, 2010). It should be noted that fomite transmission involving raw food products has not been documented and warrants further research.

Other ebola virus and food considerations

Food systems may indirectly contribute to EVD transmission, particularly the consequences of environmental conditions such as deforestation that lead to increased human interaction with wildlife species that carry ebola viruses (Muyembe-Tamfum et al, 2012).  Experts have begun exploring the connections between the latest EVD outbreak and ecological disruptions, including those related to agriculture (Bausch & Schwarz, 2014).

This article suggests that an EVD outbreak among farmed swine would pose a number of concerns, including: significant animal loss with severe economic consequences; fear and panic among consumers regarding EVD as a food-borne illness leading to severe market disruption; and the considerable risk of ebola virus becoming endemic in wild pigs, which are known to carry numerous human disease-causing pathogens already (Bevins et al, 2014). There is an additional concern that swine could potentially serve as sites for new, more harmful strains of the virus to arise (MacNeil & Rollin, 2012).

If ebola viruses do remain infectious on fomites for several weeks in a real-world environment, there are implications for the global food system from harvest to the end-consumer which could have major implications for the economies and labour forces of affected nations. A scenario is described in the paper where potential transmission involves an enclosed, refrigerated shipping container on a cargo ship transporting food products and the possible routes of contamination.

The EVD outbreak in West Africa has led to increases in food insecurity in the three affected countries. The authors summarise a UN Food and Agriculture Organization report from September 2014 of severe disruptions in food availability due to: quarantine-imposed travel restrictions on sellers and consumers; panic buying; dramatic price increases; and reduced food production and harvests (including income from cash-cropping) caused by farm labour shortages and restrictions on movement. Increasing food insecurity could potentially lead to more bushmeat harvesting and associated risks of further outbreaks.

View this article as a pdf Research snapshot1 The authors commend Mija Ververs and Akanksha Arya2 for highlighting an urgent need for evidence-based breastfeeding guidance in...

View this article as a pdf Research snapshot1 During the Ebola virus disease (EVD) outbreak between 2014 and 2016 in West Africa, practitioners faced challenges providing...

Posted on behalf of Fabienne Rousseau, ACF I have a question related to infant feeding in the context of the Ebola outbreak in West Africa. Our teams are engaged in...

FEX: Experiences of the Sustainable Nutrition and Agriculture Promotion (SNAP) programme in the Ebola response in Sierra Leone

View this article as a pdf Research snapshot1 Over 2,800 cases of Ebola virus disease (EVD) have been confirmed in the ongoing outbreak in the Democratic Republic of Congo...

Dear ENN, If there is one thing that we have learnt from the current Ebola virus disease (EVD) outbreak it is that regardless of infection status, Ebola comes bringing bad...

Research snapshot[1] This Q&A with Peter Salama, Executive Director of the World Health Organization (WHO) Health Emergencies Programme, explores how the new initiative is...

FEX: Guidelines for the management of pregnant and breastfeeding women in the context of Ebola virus disease

View this article as a pdf The Democratic Republic of Congo (DRC) is currently experiencing the second largest Ebola outbreak in history, following a 2014-2016 outbreak in...

Background On December 31, 2019 the first case of what is now known as severe acute respiratory syndrome coronavirus 2 (SARSCoV-2) was reported to the Chinese Center for...

en-net: What should be the nutritional support to adult patients with Ebola Virus Disease (EVD) in treatment centres in West Africa?

Dear experts, I would appreciate your help in this. I drafted the following text but you might have ideas and other suggestions. Please help me on this one... This question...

By Tamsin Walters, en-net moderator Over the past four months1, 32 questions have been posted on en-net, generating 69 responses. Two upcoming trainings have been advertised...

en-net: Question to those working on Ebola in charge of feeding patients

Dear colleagues. In 2014, WHO launched interim guidelines on Nutritional care of children and adults with Ebola Virus Disease. I would like to know whether these guidelines...

View this article as a pdf Research snapshot1 Interruption of exclusive and continued breastfeeding is responsible for nearly 700,000 maternal and child deaths annually....

Factors influencing pastoral and agropastoral household vulnerability to food insecurity in Kenya Kenya has a population of more than 38 million, 10% of whom are classified as...

en-net: What can we do to ensure food security in the context of COVID-19?

Question submitted to the prevention workstream of the Wasting and Risk TWG. What can we do to ensure food security in the context of COVID-19? Is there research from other...

By Megan W. Bourassa, Filomena Gomes and Gilles Bergeron Megan Bourassa, PhD is the Associate Director for Nutrition Science at the New York Academy of Sciences where she has...

FEX: Review of WHO guidelines for the inpatient management of severe acute malnutrition

Summary of research1 Location: Global What we know: Optimising SAM management is an important strategy for reducing malnutrition-related mortality. What this article adds: A...

FEX: The link between tuberculosis and undernutrition

Research snapshot1 Undernutrition increases the frequency, severity and fatality of many infections, including tuberculosis (TB), while infections, in turn, worsen...

Review of the role of food and the food system in the transmission and spread of ebola virus. Field Exchange 52, June 2016. p20. www.ennonline.net/fex/52/foodsystemebolavirus