Intergenerational cycle of acute malnutrition among IDPs in Somalia

Samson Desie is a nutrition specialist who has worked in the sector for more than a decade and currently works as Nutrition Cluster Coordinator with UNICEF Somalia.

What we know: High levels of acute malnutrition persist among internally displaced children in Somalia; socio-cultural practices that impact women, including teenage pregnancy, are a major underlying cause.

What this article adds: A Nutrition Cluster (NC) visit to an outpatient therapeutic programme in Garowe, Somalia, found only one third of children were accompanied by their mother; over half of mothers were less than 18 years of age. The remaining admissions presented with a sibling, usually less than ten years of age; mothers were absent in search of work. The NC considers school nutrition a key strategy to break the intergenerational cycle of malnutrition in the Somalia context; it invests in nutrition development and fosters humanitarian-development connections. To address the circumstances witnessed in Garowe, the NC has developed a pilot comprehensive school-nutrition programme in collaboration with the Education Cluster to build evidence with a view to scale-up.

Children in internally displaced persons (IDP) sites in Somalia remain at increased risk of acute malnutrition. The validated and endorsed Deyr (short rainy season) 2015 nutrition survey conducted by Somalia Food Security and Nutrition Analysis Unit (FSNAU) indicates a deterioration in the nutrition situation in five IDP sites (Dhobley, Baidoa, Dolow, Garowe and Galkayo) among the 13 sites surveyed in September 2015; these are areas of critical concern (see Figure 1). Furthermore, the latest Gu (main rainy season) 2015 findings show little improvement in the median global acute malnutrition (GAM) rate, with IDPs in Dolow having the worst rates of malnutrition (sustained critical GAM rates of 25% and severe acute malnutrition (SAM) prevalence of 6.1%). Further deterioration was also observed, moving from Serious to Critical in Garowe and Galkayo (sustained hot spots for the last five seasons), as well as among Bossaso IDPs (12.5 % to 16.8 %). The results call for urgent action in this protracted crisis, and the critical need to scale up multi-sector programmes in an integrated manner, including at IDP site level.

“When a 13-year-old girl gets married and has a baby, there is often stress between her and her husband, which can lead to divorce… After a divorce, the girl is left to provide for the children, but most often they are not able to due to lack of resources” (Mothers focus group discussion). 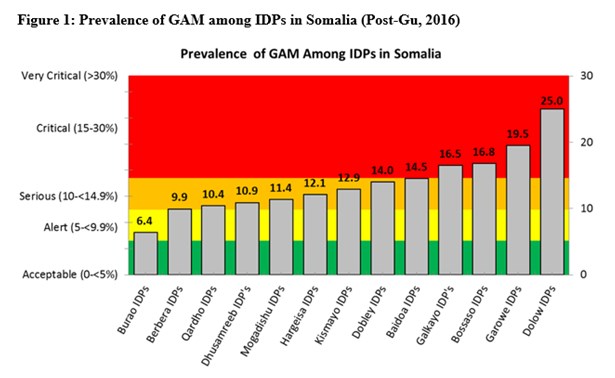 The underlying causes of sustained malnutrition

Sustained levels of acute malnutrition in IDP sites have always been a challenge in Somalia; studies and surveys have been conducted to understand the underlying causes of its persistance despite ongoing interventions. A recent nutrition causality study outlines socio-cultural practices as one of the major underlying causes and highlights certain socio-cultural beliefs and practices in particular that have a major impact, including female genital mutilation (FGM), early marriage and premature, repeated child bearing by girls (13+ years) (SNS Consortium, 2015). Infant and young child feeding (IYCF) practices are weak and adversely affected by heavy women’s workloads, increased shifts to cash economies and absent fathers (due to divorce and khat use).

The Nutrition Cluster (NC) visited a Garowe IDP site on 24 February 2016. At the time, 37 children were admitted in the outpatient therapeutic programme (OTP). During the visit, only 14 (36%) children arrived with their mothers; eight (57%) of the mothers were aged 18 years or under. The remaining children came to the centre with their siblings, who are mostly children under the age of ten themselves. On further discussion with these children, it was understood that most mothers were away in town, looking for casual labour (e.g. cleaning, cooking, carrying and domestic service). Leaving children to be attended by older siblings is a significant factor limiting the care children require, especially those suffering from malnutrition. The fact that many mothers are under 18 years old is also an underlying cause of the sustained level of acute malnutrition.

The story of Sabri and her daughter (see Box 1) is typical of the phenomenon of the intergenerational cycle of malnutrition which sees teenage mothers give birth to an intrauterine growth-restricted infant and/or a low-birth-weight (LBW) baby (a baby born weighing less than 2.5 kg). The intergenerational cycle of growth failure, first described in 1992 in the Second Report on the World Nutrition Situation (UNSCN,1992) and illustrated in Figure 2, explains how growth failure is transmitted across generations through the mother. The theory is that small adult women are more likely to have LBW babies, and LBW children are more likely to have growth failure during childhood. Thus, in turn, girls born with a LBW are more likely to become small adult women. The cycle is accentuated by high rates of teenage pregnancy. This situation, coupled with early marriage and early divorce in Somalia, is becoming a major problem but is not fully appreciated by all stakeholders. 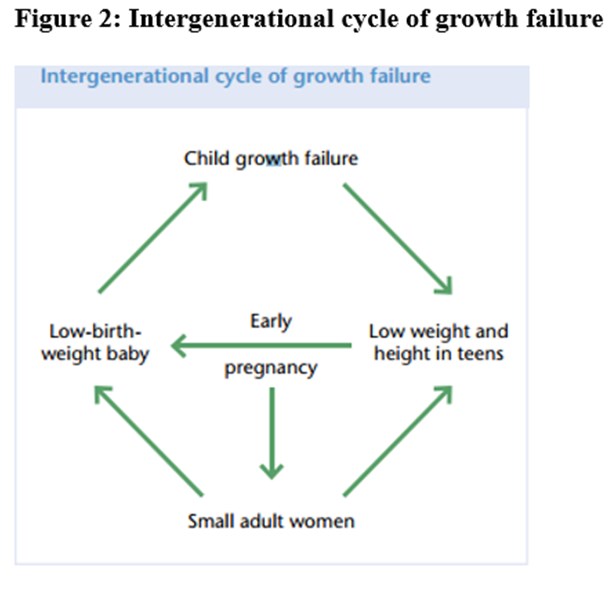 Actions to take in Somalia

The authors of the UNSCN Nutrition Policy Paper No 18 on LBW  (Pojda & Kelley, 2000) found that many questions about reducing LBW rates remain unanswered. The paper highlights the urgent need to find sustainable practices that will improve women’s nutritional status prior to pregnancy and weight gain during pregnancy. Many actions can be taken in the Somalia IDP context. Efforts to improve adolescent nutrition are needed, especially to control micronutrient deficiencies in adolescent girls. The nutrition programme in Somalia has never carried out such activities and should be piloted in selected IDP sites with a view to scale-up. Districts with high burdens of sustained acute malnutrition could also be targeted with similar actions; lessons from the experiences would help to scale up such approaches. The strategy should also attempt to link with livelihoods and other social protection and safety-net programmes.

Teenage pregnancy is a probable significant cause of malnutrition in most parts of Ethiopia, including IDP sites. It is well recognised that the size and body composition of the mother at the start of pregnancy is one of the strongest influences on foetal growth (Kramer, 1987). Studies in the USA have shown that there is maternal and foetal competition for nutrients in adolescent mothers, and birth weight of infants of adolescent mothers are around 200g lower compared to non-adolescent mothers (Scholl et al, 1997). Given this, efforts should be directed towards developing community-based adolescent girls’ clubs in order to help with the early detection of teenage pregnancies in communities and educate girls on improved life skills for teenage pregnancy prevention.

1.      Establish a system to provide comprehensive and routine nutrition assessment and counselling services for adolescents at community, school (Ministry of Education, 2012) and health-facility level;

5.      Ensure access to and utilisation of water, sanitation and hygiene (WASH) practices in households, communities and schools;

6.      Conduct regular monitoring of nutritional status of school-age children/students; and

2.      Ensure PLW access to micronutrient services, including provision of routine iron folic acid or multiple micronutrient supplementation; promotion of the use of iodised salt; and deworming during the second and third trimesters of pregnancy;

3.      Develop key action-oriented nutrition messages to increase the involvement of fathers, grandparents and faith-based/traditional community organisations in supporting PLWs, including ensuring access and utilisation of WASH practices; and

4.      Support the involvement of women groups in nutrition-sensitive agriculture and livelihood programmes and ensure access to time and labour-saving technologies.

Their experience of the horrifying reality prompted action by the NC to come up with a concrete option to reach adolescent girls. The NC considers school nutrition a key strategy to break the intergenerational cycle of malnutrition in Somalia. A school-nutrition initiative also offers strategic engagement for a long-term resilience perspective, is in the interests of developmental nutrition and helps bridge the humanitarian-development nexus. In collaboration with the Education Cluster, a comprehensive school-nutrition programme has been developed which will be implemented in a few selected schools to generate further evidence with a view to possible scale-up. The project will follow a continuous learning and adoptive approach and will start with an adaptation of the World Bank FRESH (Focusing Resources on Effective School Health, Hygiene, and Nutrition Programmes) framework. Funded by the Somalia Humanitarian Funding (SHF) as a pilot, it will be implemented by SCI in Baidou. We look forward to sharing learning from our ongoing implementation of comprehensive school nutrition among IDPs as well as host communities.

In emergencies, a marginal or deficient diet for a pregnant or lactating woman has repercussions not only for her own health, but also for the health of the unborn, and the...

By Bruce W Larkin and Julie Tanaka View this article as a pdf Bruce W Larkin is a doctoral candidate (MD) at the Medical School for International Health at Ben-Gurion...

By Ajay Acharya, Pooja Pandey Rana, Bhim Kumari Pun and Basant Thapa View this article as a pdf Ajay Acharya is a Family Planning Specialist for the USAID-funded Suaahara II...

By Erin Lisemby Erin Lisemby is a registered dietitian/nutritionist currently working with the US Special Supplemental Nutrition Program for Women, Infants and Children (WIC)...

Research By Erin Homiak Erin Homiak MPH is seconded to SETSAN Manica as Nutrition Advisor. Her role is funded by UKaid/DFID. She has been working for Concern Worldwide since...

FEX: Managing at risk mothers and infants under six months in India – no time to waste

Research Summary 1 Poor nutrition in early life threatens the growth and development of children, which has a knock-on effect on the sustainable development of nations. This...

David I. Thurnham, Sight and Life, Volume 27 (3) 2013. Available at www.sightandlife.org Adolescence during the teenage years of 13 to 19 is a time of dramatic change....

Hi there, I have read several times in this forum that MUAC is NOT affected by oedema or pregnancy. I can not find any study about it. Could anyone give me some references...

By Michael H Golden Michael Golden is Emeritus Professor at the University of Aberdeen, Scotland. An independent physician and researcher, he has over 40 years of experience...

FEX: Delivery of maternal nutrition interventions at scale and mainstreaming into the health system in Bangladesh

Breastfeeding (BF) is reported to be one of the most effective investments a country can make in nutrition programming. It not only provides protection against child morbidity...

View this article as a pdf Lisez cet article en français ici By Daya Krishna Mangal and Shobana Sivaraman Daya Krishan Mangal is Professor and Dean of Research at the...

FEX: Early lessons from Swabhimaan, a multi-sector integrated health and nutrition programme for women and girls in India