Abbi Sage is a recent MSc graduate in Nutrition for Global Health from the London School of Hygiene and Tropical Medicine. She is now part of the Knowledge Management Team of the Nutrition Division of the World Food Programme.

The author acknowledges her supervisor, Suneetha Kadiyala, and co-supervisor, Helen Harris-Fry, for their joint support. 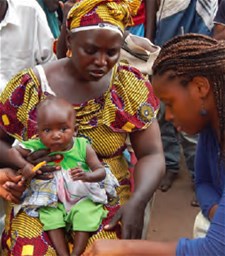 What we know: A child who is both wasted and stunted has higher associated morbidity and mortality.

Wasting and stunting are commonly considered as separate undernutrition conditions in programming and policy worldwide. Recent evidence points to the correlative nature of the two conditions and suggests that a child who is moderately wasted and stunted at the same time is at far higher risk of mortality compared to a severely wasted or stunted child (Khara T, Dolan C, 2014).

With an estimated population of 1.8 million, Guinea-Bissau has a high infant mortality rate at 77.9 per 1,000 births. In 2015, the under-5 mortality rate was even higher at 124 per 1,000 live births (12.4%). Political instability means 70% of the population live in poverty. Food insecurity, seasonal changes in rainfall, poor infant and young child feeding (IYCF) practices, poor water and sanitation, and inadequate health services result in undernutrition being a major public health concern; prevalence of chronic undernutrition is above 25%.

The overall aim of this study was to identify socioeconomic and health factors that are associated with the coexistence of wasting and stunting in children between the age of 6-59 months in Guinea-Bissau. Specific objectives were:

Data from a UNICEF Multiple Indicator Cluster Survey (MICS) published in 2014 were used for this secondary data analysis. Only participants in the MICS that met the eligibility criteria outlined below were included in the analysis. A total of 6,602 children living in 4,016 households and 5,303 mothers were included in the final analysis.

Using the UNICEF conceptual framework of undernutrition, indicators from the original survey were used as proxy measures for more commonly used indicators, based on prior literature. In this study, the immediate predictors were considered at the individual level of the child, while the underlying and basic predictors are at the maternal and household level (see Figure 1). 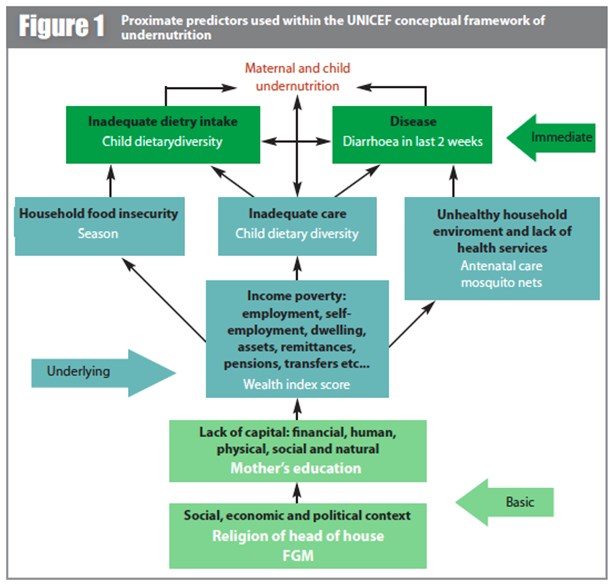 *Female Genital Mutilation (FGM) was included in the model due to Guinea-Bissau’s high rate of this practice, used as a proxy indicator for women’s empowerment.

Univariate, multinomial logistic regression was initially used to investigate crude relationships between covariates and wasting; stunting; and wasting and stunting combined, compared to not wasted or not stunted children. Variables in the univariate analysis with a small sample size due to missing values were not included in the multivariable regression. The multivariable regression results were deemed statistically significant if covariates produced a p-value of ≤0.05. All analyses accounted for the clustered sample design.

The median age of mother/caregivers was 27 years (IQR 26.5, 27.5); the largest group of mothers were adolescents themselves (23%), aged 15-19 years old. Approximately 60% of mothers had no formal education. Most (92.2%) of women claimed to have had antenatal care during pregnancy, however 67.7% of the data were missing.

Six per cent of children were wasted, of whom 1% were severely wasted. Among all the predictors tested in the multivariate model, a child whose mother had undergone FGM had a reduced risk of wasting by 31% (p-value 0.05). Taking a closer look at this result, the confidence interval crosses one (0.47, 1.01), reducing the certainty of the significance which could be a result of the arbitrary p-value cut-off.

Surprisingly, there were more wasted children who were wealthy compared to the poorest in the sample population being studied. Children with a richer wealth index were 2.27 times more likely to be wasted than children with the poorest wealth index (p-value 0.006). One explanation for this association may be that more children were wasted in urban areas than rural areas (4.2% and 3.2% respectively). It may not be the case that a higher wealth index predicts wasting but that, in this population, children were more likely to be wasted due to the higher percentage of wasted children living in urban areas, where wealth index scores were generally higher. The urban capital, Sector Autónomo de Bissau (SAB), had the highest percentage of wasting compared to all other regions. Future research is needed into the current state of children in urban settings in Guinea-Bissau, particularly SAB, to understand the factors at play with this association.

Only 2.4% of children aged 6-59 months were both wasted and stunted at the time of the survey; however, of those stunted, 8.2% were wasted and of those who were wasted, 40.7% were stunted. No wasting, no stunting, and wasting and stunting individually were distributed equally across girls and boys. However, boys were 24% more concurrently wasted and stunted than girls.

In the multivariate analysis, children who had diarrhoea in the last two weeks were 75% more at risk of being both wasted and stunted than those who did not, relative to children who were neither wasted or stunted (p-value 0.022). There was strong evidence that having a mosquito net in the household decreased a child’s risk of being both wasted and stunted by 78% compared to not having a mosquito net (p-value 0.003).

Due to the small sample size of the psychosocial stimulation predictor, a separate multivariate regression adjusting for sex, child age, mother age and wealth index was created. There was weak evidence for a protective association between psychosocial stimulation and wasting and stunting (N=2,744). For every additional person to engage in cognitively engaging activities with the child, the child had a 15% lower risk of being concurrently wasted and stunted, relative to a not stunted or wasted child (p-value 0.043).

Approximately 30% of children were stunted (WHO high public health concern), while 6% were wasted (WHO medium public health concern). Due to the cross-sectional nature of the data, the prevalence of wasting seen here may not reflect the true prevalence of wasting in under-fives. Another limitation of this analysis is missing data, limiting the ability to test predictors such as dietary diversity and antenatal care.

The findings reiterate the importance of considering concurrent wasting and stunting when considering programming and policy to address undernutrition in Guinea-Bissau.

1Sage, A. (2016). Secondary Data Analysis on the Coexistence of Wasting and Stunting in Children Under-5 in Guinea-Bissau using MICS 2014 data. MSc Nutrition for Global Health thesis, London School of Hygiene and Tropical Medicine

FEX: Relationships between wasting and stunting and their concurrent occurrence in Ghanaian pre-school children

Summary of research* Location: Ghana. What we know: Wasting is a short-term health issue, but repeated episodes may lead to stunting (long-term or chronic malnutrition). This...

FEX: Exploring the relationships between wasting and stunting among a cohort of children under two years of age in Niger

View this article as a pdf Kohlmann K, Sudfeld C, Garba S, Guindo O, Grais R and Isanaka S (2021) Exploring the relationships between wasting and stunting among a cohort of...

Research summary1 Location: Global What we know: Wasting and stunting are often present in the same geographical populations and can exist concurrently in the same children,...

Resource: Effects on child growth of a reduction in the general food distribution ration and provision of small-quantity lipid-based nutrient supplements in refugee camps in eastern Chad

Abstract Background We used the United Nations High Commissioner for Refugees Standardised Expanded Nutrition Survey data to evaluate the effect of a change in food ration...

View this article as a pdf Click here to listen to an interview with one of the authors on the ENN podcast channel Summary of research1 What we know: Cross-sectional,...

On the 15th of January 2018 the Wasting and Stunting (WaSt) Technical Interest Group (TIG) held their third face-to-face meeting at Trinity College, Oxford. This group of 30...

Research Summary 1 Poor nutrition in early life threatens the growth and development of children, which has a knock-on effect on the sustainable development of nations. This...

FEX: Burden and determinants of wasting in Southeast Asia and the overlap with stunting

View this article as a pdf Research snapshot1 The largest proportion of wasted children globally is found in Southeast Asia, yet this is not fully recognised as a public...

FEX: Burden and determinants of wasting in Southeast Asia and the overlap with stunting

Research snapshot1 The largest proportion of wasted children globally is found in Southeast Asia, yet this is not fully recognised as a public health problem and the coverage...

View this article as a pdf This article features a snapshot of the burden of concurrent wasting and stunting in Angola using prevalence data from survey data in two...

FEX: Concurrent wasting and stunting among under-five children in Senegal

Research snapshot1 The study describes the patterns of concurrent wasting and stunting (WaSt) among children age 6-59 months living in the 1980s in Niakhar, a rural area of...

Wasting and Stunting: Overcoming the divide

FEX: A reflection on the 2021 Lancet Maternal & Child Nutrition Series through a WaSt lens

View this article as a pdf This article provides a summary of the Lancet Maternal & Child Nutrition Series to date, reflecting upon the 2021 series from the perspective of the...

FEX: The relationship between wasting and stunting in young children: A systematic review

View this article as a pdf This article was written by Susan Thurstans, PhD candidate at the London School of Hygiene and Tropical Medicine and consultant to ENN on the...

View this article as a pdf This is a summary of the following paper: Thurstans S, Opondo C, Seal A, Wells J, Khara T, Dolan C et al (2021) Understanding sex differences in...

Abstract The study describes the patterns of concurrent wasting and stunting (WaSt) among children age 6-59 months living in the 1980s in Niakhar, a rural area of Senegal...

Summary of published research 1 The post-tsunami survey reported below describes a decline in nutrition and health status amongst women and children, and makes...

FEX: The Wasting-Stunting Technical Interest Group: A summary of the work to date

View this article as a pdf Lisez cet article en français ici This article outlines the work of the Wasting-Stunting Technical Interest Group since its inception in...