Key findings from the Click-MUAC Project

Zvia Shwirtz currently works as the Research Uptake Technical Advisor for Action Against Hunger US, working closely with colleagues to ensure that evidence and results produced from research projects are effectively communicated to key stakeholders in policy and practice and used to inform decision-making.

André Briend, a Medical Doctor with a PhD in nutrition from Paris University, with over 30 years of experience in research in pediatric nutrition in developing countries. Currently he is Adjunct Professor at the University of Tampere, Department for International Health, Finland, and Affiliated Professor, Department of Nutrition, Exercise and Sports, Faculty of Science, University of Copenhagen, Denmark.

Mark Myatt is a Consultant Epidemiologist and Senior Research Fellow at the Division of Opthalmology, Institute of Opthalmology, University College London. His areas of expertise include infectious disease, nutrition and survey design.

What we know: Mid-upper arm circumference (MUAC) is increasingly used for community screening to detect acute malnutrition; screening by mothers is being explored.

What this article adds: A study in Kenya by Action Against Hunger described the performance of three Click-MUAC devices measured against a gold standard (study team measurements) for classification of nutritional status. Mothers/caregivers and clinic staff demonstrated good sensitivity and excellent specificity using the Click-MUAC tapes and the uniMUAC tape. The uniMUAC tape performed best for both mothers/caregivers and clinic staff (sensitivity and specificity); one-to-one instruction and recent improvements in design may have helped. Action Against Hunger is now piloting a simplified version of the uniMUAC tape for mothers/caregivers in Isiolo County.

Building on this recent evidence, Action Against Hunger (AAH) set out to develop a set of three prototype Click-MUAC devices to support the mother/family MUAC approach and to test them in an operational setting. The idea was to simplify and standardise the measurement of MUAC to increase the sensitivity and specificity2 of mother and caregiver classifications of acute malnutrition.

The study team developed three Click-MUAC devices with the help of plastics specialists, using a plastic printing injection process (see Figure 1). The study also used a universal design, colour-banded MUAC insertion tape (“uniMUAC”), designed and produced by a consortium of non-governmental organisations (NGOs) and academics led by Médecins Sans Frontières (MSF) (see Figure 2). The study was designed as a prospective, non-randomised, non-blinded, clinical diagnostic trial to describe and compare the performance of the devices. It was implemented in Isiolo County, Kenya, from September 2016 to January 2017. Mothers/caregivers and clinic staff used the Click-MUAC devices and the uniMUAC insertion tape to classify the nutritional status of the child and these classifications were compared to a gold standard measurement taken by the study team.

Figure 1: The three Click-MUAC prototypes used in the study 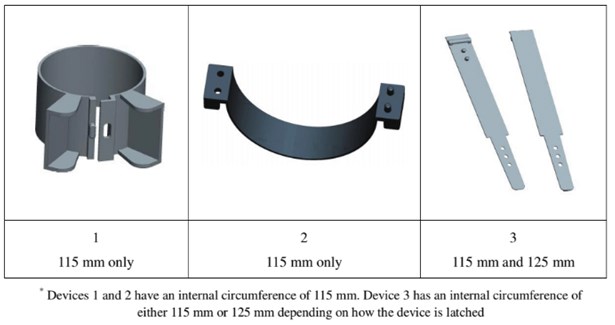 Figure 2: Features of the universal design MUAC insertion tape used in the study 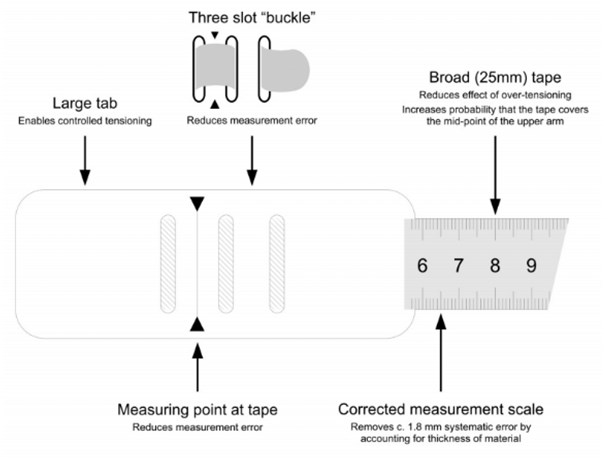 An article describing the results of the Click-MUAC study in full is currently pending publication (Grant et al.). In summary, the study was successful in describing and comparing the performance of the devices. A total of 1,040 children were assessed over the course of the study and the minimum sample sizes (n=115) were reached for all categories (MUAC ≥125mm; 115mm ≤ MUAC < 125mm; and MUAC < 115mm).

However, the most surprising aspect of the study was the fact that, while the Click-MUAC devices performed well, the device that performed best was the uniMUAC tape and the difference in performance was statistically significant. Both mothers/caregivers and clinic staff showed excellent results for sensitivity and specificity in the classification of acute malnutrition (GAM and SAM) using the uniMUAC tape.

Conclusion and next steps

The results for sensitivity for the classification of acute malnutrition by mothers/caregivers are higher than in previously reported studies for all devices (both Click-MUAC and uniMUAC). This may be due to the method of demonstration of the devices, which was a one-on-one demonstration to the mother/caregiver by the study team, whereas previous studies used mass demonstration techniques. Previous studies also used conventional MUAC tapes, whereas this study used a uniMUAC tape with an improved design; this may also have contributed to the increase in the sensitivity of the classifications.

Overall, the findings from the Click-MUAC project help to bolster the evidence that mothers and caregivers can indeed understand MUAC measurement and perform measurements with good sensitivity and specificity. All devices performed well; however the uniMUAC tape performed best and – crucially – can be manufactured more cheaply. AAH strongly supports the mother/family MUAC approach and is now involved in piloting a simplified version of the uniMUAC tape for mothers/caregivers (see Figure 3) in an operational pilot in Isiolo County. Data collection on this stage of the Click-MUAC project is ongoing with the intention of examining the uptake of the approach by mothers/caregivers, its potential impact on admissions and the level of buy-in from the local health system and authorities.

Published findings can be found at this link.

3The gold standard for this study was the mean of three MUAC measurements taken by the study team with a universal MUAC tape (“uniMUAC”).

Blackwell N, Myatt M, Allafort-Duverger T, Balogoun A, Ibrahim A, Briend A. Mothers Understand it And Can do it (MUAC): A comparison of mothers and community health workers determining mid-upper arm circumference in 103 children aged from 6 months to 5 years. Arch of Public Health 2015; 73 (1):26

Here is an article comparing the performance of different MUAC measurement / classification devices including the new universal MUAC...

FEX: Mothers understand and can do it (MUAC)

FEX: Anthropometry in infants under 6 months in rural Kenya

Summary of research1 Reliability study participants It is currently estimated that worldwide 8.5 million infants under 6 months are wasted. In poor communities, low rates of...

Summary of published paper1 An infant having MUAC measured during the study in Kenya Current WHO guidelines for the management of severe malnutrition in children recommend...

Summary of research1 Location: Global What we know: The World Health Organization (WHO) recommends weight-for-length z score (WLZ) as an anthropometric indicator to identify...

View this article as a pdf By Alice Burrell and Hatty Barthorp Alice Burrell has been working in humanitarian nutrition for the past five years, with experience across Asia,...

en-net: Are you using the Mothers measure MUAC approach or do you know someone who is? If so, we want to hear from you!

Action Against Hunger, in partnership with ALIMA, are compiling a lessons learned document detailing the use of this approach worldwide, building on the existing evidence...

Summary of research1 The World Health Organisation (WHO) and UNICEF propose to use two independent criteria for diagnosing non-oedematous severe acute malnutrition (SAM) in...

Less than 25% of children with severe acute malnutrition around the world are currently accessing treatment. How do we reach more children suffering from this...

When was the MUAC tape invented?

Not a technical question but... Does anyone happen to know the whereabouts of Dr Fred...

This series of titles are available from TALC (Teaching Aids at Low Cost), and are valuable for Nutrition Practitioners and Trainers as recommended by Ann Burgess and Marko...

Apologies for the rather mundane question - GOAL used to procure their colour coded, enumerated MUAC tapes (26cm) from Valid Int' for ~7p/unit, unfortunately they no...

View this article as a pdf The World Food Programme (WFP) has introduced a cloud-based innovation named 'SCOPE CODA' to improve data management in malnutrition treatment...

Here is an article on MUAC and weight change during treatment for...

FEX: MUAC vs WHZ in predicting mortality in hospitalised children under five years of age

Summary of research1 This research contributes to the evidence base regarding which anthropometric indicators identify malnourished sick children most at risk of death. Low...

By Kristy Manners, Muriel Calo, Imelda Awino and Jacob Korir Kristy Manners specialises in Nutrition and Public Health and has worked extensively in the horn of Africa. She is...

Hello,
I wish to have support on a methodological approach to compare two studies. A study by LQAS and another sampling method.