Ajay Acharya is a Family Planning Specialist for the USAID-funded Suaahara II programme1. He holds a Masters of Public Health from Hebrew University of Jerusalem and has over five years’ experience in nutrition, health quality improvement, family planning, health system strengthening and maternal and child health.

Pooja Pandey Rana is Deputy Chief Party for the Suaahara II programme and has almost 20 years’ experience in multi-sector nutrition programming in Nepal.

Bhim Kumari Pun is a Senior Integrated Nutrition Programme Manager for the Suaahara II programme. She has 25 years of experience in nutrition, newborn and child health and community-based approaches and holds a Masters of Public Health from Hebrew University of Jerusalem, Israel.

Basant Thapa is a Family Planning Advisor for the Suaahara II programme. He has over 25 years’ experience in public health in different organisations.

The authors acknowledge Suaahara II/USAID for overall research support. They also acknowledge Kenda Cunningham, Senior Technical Advisor for Suaahara II, for her review, guidance and support in the development of this paper and Suaahara II district office in Kapilvastu, Nepal’s District Health Office in Kapilvastu, and Suaahara II field supervisors for support in data collection and field work. The authors would also like to thank Shalini Suresh, Femila Sapkota, Subash Yogi and Indra Dhoj Kshetri for their support in conceptualising the analysis, draft writing and field work.

The findings, interpretations and conclusions in this article are those of the authors. They do not necessarily reflect the views of USAID and should not be attributed to them.

What we know: There are very high rates of iron-deficiency anaemia among adolescent girls in Nepal, which has negative health consequences, particularly during adolescent pregnancy.

What this article adds: A 2017 study in Nepal investigated barriers and enablers of iron-rich food consumption among teenage girls in Kapilvastu, a terai (plains district) of Nepal. Ninety-four adolescent girls (mean age 15 years) were interviewed using a semi-structured questionnaire; participants were assigned to either a ‘doer’ (n=46), or a ‘non-doer’ (n=48) group, based on 24-hour recall of eating or not eating iron-rich foods. Most girls in both groups (91 per cent of doers and 92 per cent of non-doers) perceived that a main facilitator for the consumption of iron-rich foods was the availability of green leafy vegetables at home. Half of non-doers perceived that the lack of availability of iron-rich foods at home makes it more difficult to consume iron-rich food, significantly more than non-doers. Significantly more non-doers than doers (p=0.002) perceived family income to be important (although only 19 per cent reported this). There were significant differences in perceptions between doers and non-doers regarding advantages of eating iron-rich foods (physical growth and development, source of energy and protection from disease). Both groups would benefit from nutrition education to address misconceptions. Parental support in consuming iron-rich foods, particularly from mothers, was perceived as important in both groups, suggesting that other household members, especially mothers, should be included in nutrition education programmes.

The World Health Organization (WHO) estimates that 29 per cent of all women of reproductive age and 38 per cent of pregnant women worldwide are anaemic, half of whom have iron-deficiency anaemia (WHO, 2011). In Nepal, 41 per cent of women aged 15 to 49 years and nearly half of all pregnant women suffer from anaemia (NDHS, 2016). Adolescent girls are particularly vulnerable to anaemia due to menstrual blood loss, the demands of pubertal growth, vulnerability to infection and worm infestation, and reliance on iron-poor, staple crop-based diets (WHO, 2011a). An estimated 43 per cent of adolescent girls (aged 15-19 years) are anaemic in Nepal (NDHS, 2016), with prior studies conducted in Nepal and India showing even higher prevalence in this age group (50 per cent to 90 per cent). Iron deficiency in adolescents is associated with lowered attentiveness, memory, school performance, school attendance and learning retention; stunted physical growth; delayed onset of menarche; increased morbidity from infection; and reduced physical capacity and work performance (WHO, 2011a). Anaemia during pregnancy increases the risk of fetal mortality and morbidity; low birth weight (LBW); and overall infant mortality, the risk of which is increased further in adolescent pregnancy (WHO, 2011a).

Adequate iron consumption in young girls can improve cognitive performance and iron stores for later pregnancies (WHO, 2016). The Ministry of Health (MoH) in Nepal recently introduced a weekly iron and folic acid (IFA) distribution programme to adolescent girls in 12 of its 77 districts. Nutrition education can improve compliance in such programmes and education on diet and the importance of consumption of iron-rich foods can complement supplementation. To inform this, it is important to identify behavioural determinants (barriers and enablers) among those who consume iron-rich foods (‘doers’) and those who do not (‘non-doers’) within this age group. This study investigates barriers and enablers of iron-rich food consumption among doer and non-doer adolescent girls in Nepal to provide this valuable information to policy makers, planners and implementers of such programmes. 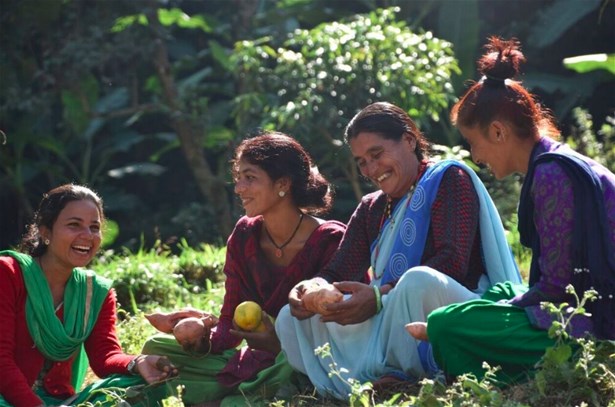 Cross-sectional data were collected in January and February 2017 from one terai district (Kapilvastu) in Nepal. A questionnaire was developed using standard guidelines (Kittle, 2013) and translated into Nepali. Sixteen data collectors were trained for two days on its use. Enumerators were also given a set of food cards each (pictorial cards displaying local iron-rich foods) to aid interviews. Kapilvastu was selected because of its rich cultural, linguistic and ethnic/caste diversity. The district has a population of almost half a million, including more than 100,000 adolescents, of whom about 50 per cent are females (CBS Nepal, 2011). Multi-stage sampling was used and eight different communities were selected for data collection, based on geographical location (north, south, east and west) and participants were recruited voluntarily. In Kapilvastu, one municipality and seven village development committees (VDCs) were selected. Within selected VDCs and municipalities, eighteen wards (the smallest geographical unit in Nepal) were selected for study inclusion.

Each interview lasted up to 30 minutes; results were recorded on paper and coded the same day. To ensure consistency of reporting, coding took place in groups of enumerators through group discussion. Responses were compiled and analysed on an Excel barrier analysis tabulation sheet and in SPSS version 23.0.

The analysis identified key factors that explain the differences between adolescents who consumed iron rich-foods on the previous day and those who did not. The mean age of respondents was 15 years and respondents ate three times on the previous day on average. Tables 1 and 2 provide summary information for the barrier and facilitator constructs generated from the data. Important findings were: 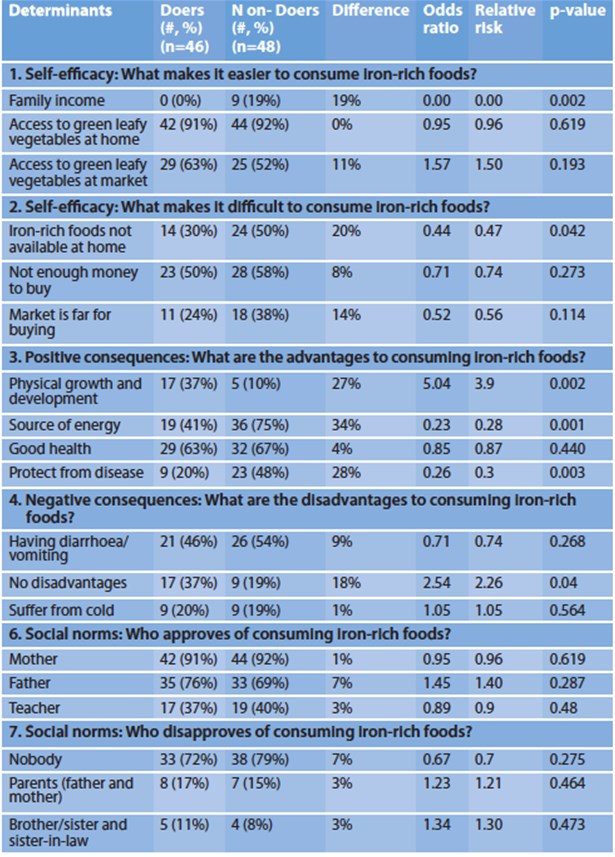 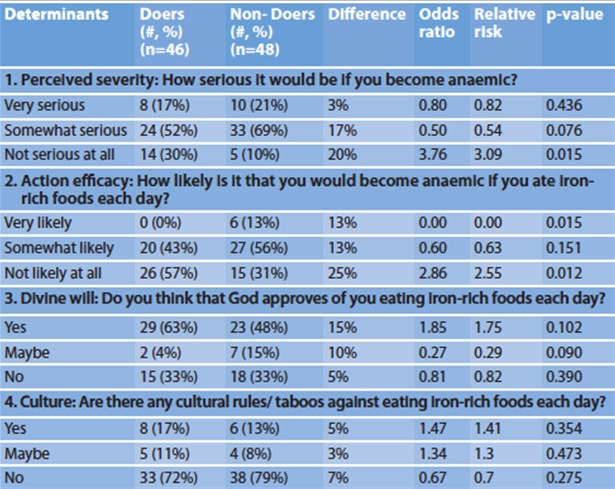 The results of this study show that a main perceived facilitator for the consumption of iron-rich foods among adolescent girls in Nepal is the availability of green leafy vegetables at home. This suggests behavioural change interventions should target households and, in particular, members with influence over foods purchased and consumed. In terms of household income, non-doers were more likely to cite low income as the reason for there being less green leafy vegetables at home, although the actual proportion reporting this was low. A 2014 adolescent nutrition survey in Nepal (Aryal et al, 2014) found no difference in anaemia prevalence by family monthly income, which suggests that this may not be as important as food choice.

The perceived positive consequences have a significant impact on nutritional behaviour (Beydoun and Wang, 2008); hence nutrition education is important. Results from this study show that there is great opportunity to educate adolescent girls on nutrition to emphasise the positive benefits of consuming iron-rich foods, address misconceptions about the disadvantages of consuming these types of food, and draw linkages between iron-rich foods and anaemia. This seems to be important for both groups, particularly for non-doers. This study is an initial step in filling gaps in understanding the influences on the dietary practices of adolescent girls in Nepal; additional research is needed, particularly in other parts of the country. This type of research is crucial for designing policies and programmes to improve the consumption of nutritious foods, such as iron-rich foods, and ultimately to improve the health and nutritional status of this population.

1The USAID-funded Suaahara II Good Nutrition Program aims to improve health and nutrition among women and children in 40 out of 77 districts of Nepal. Suaahara II is supporting Government of Nepal in expanding the adolescents’ iron supplementation programme and improving health and nutrition behaviors among adolescents through capacity building, school health programme, media mobilisation, monitoring and research.

WHO (2011a). World Health Organization. Prevention of iron deficiency anaemia in adolescents: role of weekly iron and folic acid supplementation.

NEX: Breaking the cycle of malnutrition: Designing an adolescent programme in Nepal

Lisez cet article en français ici View this article as a pdf Min Raj Gyawali is the Senior Manager for Health Services with the Suaahara II programme in...

FEX: Barrier analysis of infant and young child feeding and maternal nutrition behaviours among IDPs in northern and southern Syria

The role of nutrition-sensitive agriculture in improving diets of young children: Homestead food production in Nepal

View this article as a pdf Rojee Suwal is the Senior Manager of Agriculture and Food Security in the Suaahara II programme, Helen Keller International, Nepal. Basu Dev Kafle...

FEX: Municipal budget allocation and utilisation for nutrition in Nepal

FEX: Integration of family planning in nutrition programming: experiences from the Suaahara II programme in Nepal

FEX: Nutrition-sensitive WASH programming to improve the nutritional status of women and children in Nepal

View this article as a pdf Dr Ram Padarath Bichha is Director of the Family Welfare Division, Department of Health Services, Ministry of Health and Population, Nepal. Kedar...

As you may have seen, ENN recently launched its latest issue of Field Exchange Issue 65. As one of the sub-editors, I have enjoyed the privilege of editing some of the...

FEX: Integration of family planning in nutrition programming: experiences from the Suaahara II programme in Nepal

This is a summary of a Field Exchange field article that was included in issue 64. The original article was authored by Basant Thapa, Manisha Laxmi Shrestha, Dr. Bhuwan Poudel,...

FEX: Dietary intake and practices of adolescent girls in low and middle-income countries: A systematic review

NEX: Addressing adolescent anaemia in Afghanistan through a school-based programme

Taken from draft guideline material prepared by Fiona Watson, Institute of Child health, London. Micronutrients are essential for life and are distinct from macronutrients...

FEX: Risk of nutritional deficiencies increases during female adolescence – a comparison of the cost of a nutritious diet across sex and age

View this article as a pdf By Zuzanna Turowska, Janosch Klemm, Nora Hobbs and Saskia de Pee Zuzanna Turowska is a Food Systems Analyst in the Nutrition Division of the World...

Read here summarised and simplified versions of select Field Exchange articles for a multi-sectoral audience. To sign up to the Field Exchange Digest alerts, please click...