Relapse after treatment for moderate acute malnutrition: Risk factors and interventions to prevent it

Summary of presentation1 based on published research2

By Heather Stobaugh and Mark Manary

Dr Heather Stobaugh has a PhD in Food Policy and Applied Nutrition and works in global nutrition research at RTI International. She has experience working as a consultant and technical advisor for development and emergency nutrition programmes around the world and conducting rigorous research, clinical trials and operational research with Washington University in St. Louis and Tufts University.

Dr Mark J Manary was one of the first champions of ready-to-use therapeutic food (RUTF) for use in the community-based management of acute malnutrition (CMAM). The scope of his work includes developing and introducing novel foods, active prevention schemes and gut microbiota and metabolome in kwashiorkor and marasmus, and devotes several months each year to overseeing clinical and translational studies in Malawi, Sierra Leone and Ghana.

This research was supported by a sub-award funded by Family Health International under cooperative agreement/grant AID-OAA-A-12-0005, which was funded by the United States Agency for International Development.

What we know: Little is known on post-discharge outcomes of children treated for moderate acute malnutrition (MAM).

What this article adds: A cluster-randomised controlled trial in Southern Malawi assessed whether a package of five health and nutrition interventions helped sustain recovery for one year after MAM treatment. A total of 1,497 children who recovered from MAM at 21 supplementary feeding programme (SFP) study clinics were enrolled. The treatment group received counselling (as per control) and on discharge were given eight weeks of lipid-based nutrient supplement (LNS), albendazole, 14 weeks of zinc supplementation, an insecticide-treated bed net and malaria chemoprophylaxis during the rainy season. Fifty-one per cent sustained recovery for one year. Many children experienced multiple relapses and relapsed cases took longer to recover on admission. Half of all relapses occurred within three months of discharge. There was no significant difference between relapse-free survival curves for the intervention and control groups; linear growth and illness patterns were also similar for both. The strongest predictors of relapse or death after SFP discharge were lower anthropometric measurements during SFP treatment. Findings suggest not all MAM children carry the same risk; programming implications need further examination.

Children with moderate acute malnutrition (MAM) are generally treated with a supplementary food for several weeks in a community-based supplementary feeding programme (SFP) until they are discharged as recovered after achieving an anthropometric threshold. Little is known about post-discharge and longer-term health and nutrition outcomes. This study assessed whether a package of simple and affordable health and nutrition interventions, added after achieving anthropometric criteria for nutritional recovery from MAM, could improve the proportion of children who sustained recovery for one year after treatment. This cohort was also used to explore factors related to sustained recovery, which remains an elusive but important goal in SFPs.

This study was a cluster-randomised, controlled, clinical effectiveness trial conducted in southern Malawi. Children aged 6-62 months3 were enrolled from 21 SFPs at the time of recovery from MAM (mid upper arm circumference (MUAC) ≥ 12.5 cm). Upon enrolment the control group received nutrition counselling, which consisted of messages regarding optimal complementary feeding, caregiver recognition of common childhood illnesses and appropriate health-seeking behaviours. The treatment group received the same counselling plus a package of five additional interventions, including: 1) 40 g/d of a lipid-based nutrient supplement (LNS) for eight weeks after SFP discharge; 2) a single dose of deworming medication (albendazole) at SFP discharge; 3) a 14-day course of zinc supplementation starting at the time of SFP discharge; 4) an insecticide-treated bed net at SFP discharge; and 5) sulfadoxine-pyrimethamine for malaria chemoprophylaxis once a month for three months during the rainy season. These interventions have all individually been proven safe, effective and affordable in this context for improving the overall health of children.

Informed consent was obtained from all caregivers. Upon enrolment, anthropometric measurements were taken and information on demographic characteristics, health history and household food insecurity was collected. Children were followed for one year and reassessed at follow-up visits at one, three, six and 12 months post-SFP discharge. Additional monthly visits were scheduled during the height of the rainy season (December through February), when malaria prophylaxis was also provided at the intervention sites. Caregivers were also encouraged to return to the clinic at any time they perceived their children’s health or nutritional status to worsen. The primary outcome was the proportion of children who sustained recovery, which was defined as maintaining a MUAC ≥ 12.5 cm without bipedal oedema at all follow-up visits during the 12 months after initial recovery from MAM.

Relapse-free survival curves were developed with the use of the Kaplan-Meier method and were compared using the log-rank test. A Cox proportional model for a multivariate analysis was used to identify risk factors for a failure to sustain recovery throughout the follow-up period. The outcome variable in the Cox regression model was either a poor outcome (defined as relapsed to MAM, developed severe acute malnutrition (SAM), or died) compared with a sustained recovery or unknown outcome. 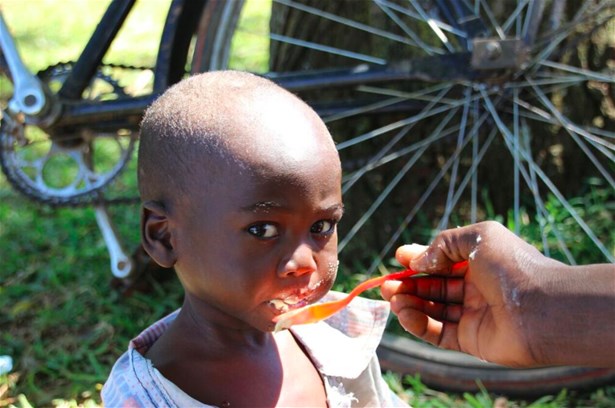 A total of 1,497 children recovered from MAM at 21 SFP study clinics and were enrolled in the study. After excluding ten children due to incorrect enrolment criteria, 1,487 children were included in the final analysis, with 718 children at control sites and 769 at 11 intervention sites.

Analysis with the use of the Kaplan-Meier method showed no significant difference between relapse-free survival curves for the intervention and control groups (P = 0.380; log-rank test). Secondary outcomes, including linear growth and illness during the 12-month follow-up period, were similar across both groups. In a Cox regression model, factors that had a protective effect against relapse or death included: having a larger MUAC on SFP admission (P < 0.01); having a larger MUAC on SFP discharge (P < 0.001); and having a higher weight-for-height z-score (WHZ) on discharge (P < 0.01). Children were also less likely to relapse or die if they received RUTF as opposed to ready-to-use supplementary food (RUSF) during treatment (P < 0.05).

This study has shown that the provision of a package of basic health and nutrition interventions to children recovering from MAM did not result in a significant increase in the proportion who sustained recovery for one year. Nearly half of all children who successfully recovered from MAM failed to sustain that recovery for one year following SFP treatment. A diversity of poor outcomes was observed among those who failed to sustain recovery. Some children experienced one short, mild episode of MAM and quickly recovered after re-enrolment in an SFP to remain free from MAM or SAM thereafter; while other children repeatedly relapsed with more severe episodes of acute malnutrition that required long treatment without any sustained recovery. These vastly different trajectories highlight the fact that, although children in SFPs are all classified with the same type and severity of malnutrition (i.e. MAM), not all children with MAM are at the same risk of poor short- and long-term outcomes. This result suggests that a uniform approach for treating all children with MAM may not be best for ensuring that all reach sustained recovery.

The strongest predictors of relapse or death after SFP discharge were lower anthropometric measurements during SFP treatment; therefore the severity of malnutrition at admission to feeding programmes is linked to increased risk of mortality and relapse in children after treatment. Likewise, the higher the MUAC and WHZ score on discharge, the more likely the child is to sustain recovery. It is possible that children who present with more severe malnutrition (i.e. lower MUAC) have additional underlying biological deficiencies that take longer to recover than can be identified by simple anthropometric measurements. Children with higher discharge anthropometric measurements may have reached a better overall health status and are more resilient when exposed to new infections that might otherwise precipitate relapse. This does not necessarily translate to the need for longer time receiving supplementary food in an SFP; rather, treatment protocols may need to adapt to go beyond the mere provision of supplementary food.

Children who successfully recover from MAM after receiving treatment in an SFP are likely to relapse during the following year. A package of basic health and nutrition interventions provided at the time of discharge and during the rainy season did not significantly reduce the proportion of children who sustained recovery. Although most SFP protocols provide the same treatment to children with MAM regardless of the anthropometric measure, our results suggest that treatment and follow-up procedures may benefit from individualisation. Our findings also suggest a potential benefit of treating high-risk children with MAM to higher anthropometric targets to reduce relapse and mortality after discharge. However, this treatment would certainly increase the immediate cost (as well as having long-term cost savings), which is an essential factor to consider before any programmatic change.

1Presentation at the ACF Research for Nutrition Conference, Pavillon de L’Eau, 13th November, 2017. A video of the presentation can be found here: https://youtu.be/pawPaxhhIZo

3Children were enrolled into SFP at 6-59 months. If a child was 59 months upon SFP enrolment and received treatment for 12 weeks, s/he could be 62 months old at discharge, which was the time of study enrolment; therefore the enrolment criteria for age was 6-62 months old.

Hello every one During treatment of SAM children in OTP we often find some drop in weight for new enrolled children in initial couple of weeks. Pakistan CMAM guideline...

en-net: How long to continue RUTF for SAM children enrolled in OTP?

Dear all,
I would like to know for how long RUTF should be continued in SAM children in the absence of SFP?
Protocol says that the discharge criteria for SAM is...

FEX: Follow-up status of children with SAM treated with RUTF in peri-urban and rural Northern Bangladesh

en-net: Do we have "SAM Cure Rate" in health facilities running CMAM program

In a health facility where there is both SAM and MAM services (CMAM). Admitted SAM cases who reached to MAM criteria by anthropometric measurements, What are we going to...

FEX: Deterioration of children with MAM who have no access to supplementary feeding programmes

FEX: Impact of nutrition education alongside treatment of moderate acute malnutrition in Madagascar

Summary of published paper Protein Energy Malnutrition decreases cellular immunity yet immune recovery has rarely been investigated during nutritional rehabilitation. In a...

FEX: Community-based management of severe malnutrition: SAM and SUW in children under five in the Melghat tribal area, central India

By Tamsin Walters, en-net moderator Over the past three months, 37 questions have been posted on en-net, generating 59 responses. The forum areas for Prevention and management...

Summary of research1 Location: Sierra Leone What we know: Impliementing separate protocols for MAM and SAM treatment can be administratively cumbersome in emergency...

Summary of research * Location: Cameroon. What we know: A wide range of nutritional products are currently used to treat MAM; there is no definitive consensus on the most...

1. What is exit criteria for severely acute malnourished child if it is recruited in a study/research on basis of MUAC (<115mm) in absence of SFP? 2. If a child recovered at...

View this article as a pdf Research snapshot1 Re-establishing exclusive breastfeeding (EBF) is the cornerstone of the 2013 World Health Organization (WHO) treatment...

FEX: WHO consultation on management of moderate malnutrition in U5s

The WHO, in collaboration with UNICEF, WFP and UNHCR, hosted a second consultation to discuss the programmatic aspects of the management of moderate malnutrition in children...

Monitoring weight change of children with SAM in outpatient care has been recommended: static weight or weight loss for 2 consecutive visits alerts the need for a home visit or...

In a CMAM program where RUTF (EezyPaste) is provided to SAM children under 5 with no complications, when should they be discharged, meaning on what criteria (MUAC and WHZ)? Is...