Infant formula advertising in medical journals: a cross-sectional study (and struggle to publish)

Sarah Morgan is a Public Health Registrar currently working with National Health Service (NHS) England in immunisation and screening. She has worked in global child health, nutrition and TB with Medair, World Vision UK and as chair of the board of Target TB. This article is based on initial research carried out as part of her MSc in International Child Health at University College London (UCL).

Tony Waterston is a retired consultant paediatrician with six years’ experience working in Africa. He led the Royal College of Paediatrics and Child Health health diploma programme in Palestine between 2000 and 2015 and is an honorary Fellow of the College. He is also lead moderator of Child Health Information for All (CHIFA).

What we know: Breastmilk substitute (BMS) marketing within the health system, combined with other factors, can undermine breastfeeding.

What this article adds: The extent of BMS advertising in leading medical journals was examined from 2003-2012 and compliance of 2012 adverts was assessed against the International Code of Marketing of Breast-Milk Substitutes (‘the Code’). Although BMS advertising was uncommon overall (in 12 journals reviewed, 8.6% of pages were advertisements of which 1.7% were for BMS), it varied markedly between different journals (only five out of 12 journals carried BMS adverts at all; one publishing group was responsible for almost 75% of all BMS advertising). Code compliance was poor: all advertisements contained purely promotional statements and none contained all of the information and warnings about BMS stipulated in the Code. Possible reasons for this are discussed. Journals should either screen BMS advertisements for Code compliance or, ideally, not carry BMS adverts at all; independent sources of information should be promoted instead.

Globally, 12% of all deaths of children aged under five years old are attributed to sub-optimal breastfeeding (Black et al, 2013). Infants in high-income countries fed breastmilk substitutes (BMS) have greater risk of gastrointestinal illness, otitis media and lower respiratory tract infections (Ip et al, 2009). The reasons for low breastfeeding rates are multi-factorial, but include the inappropriate marketing of BMS by manufacturers (WHO, 1981, 1998). An International Code of Marketing of BMS and subsequent relevant World Health Assembly (WHA) Resolutions (collectively known as ‘the Code’) aims to protect infant feeding from commercial influence. Despite the Code, questionable BMS marketing practices have been noted by several studies, including in healthcare settings (McInnes et al, 2007; Sadacharan et al, 2011; Taylor, 1998). Advertisements for BMS, including those in medical journals, should comply with stipulations of the Code. This states that information “should be restricted to scientific and factual matters, and such information should not imply or create a belief that bottle feeding is equivalent or superior to breast-feeding” and must include relevant warnings about BMS. This study aimed to describe the extent and quality of BMS advertising in high-impact paediatric and general medical journals.

A cross-sectional study was carried out by hand-searching high-impact paediatric and general medical journals published between 2003 and 2012 to quantify the prevalence of BMS advertising. Two investigators also independently assessed the content of advertisements published in 2012 for the presence of purely promotional statements and certain information statements stipulated by Articles 7.2 and 4.2 of the Code.

Of 63,167 pages searched in 12 journals (eight paediatric, four general), 5,462 (8.6%) were advertisements and 91/5462 (1.7%) of these were for BMS. Some journals carried no BMS adverts at all (Table 1); of five journals carrying BMS adverts, four were paediatric journals; one publishing group was responsible for almost 75% of all BMS advertising. 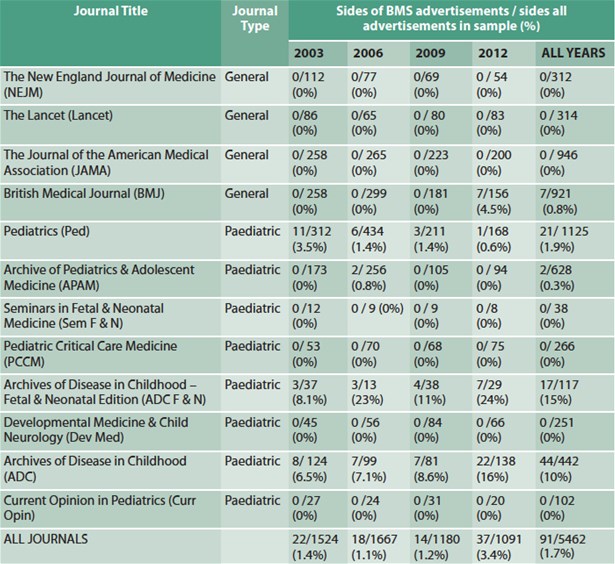 The 2012 sample contained 39 BMS advertisements, 14 of which were unique adverts. The reviewers agreed that all advertisements met the study definition of containing purely promotional statements and none contained all the information and warnings about BMS stipulated in Article 4.2 of the Code (Table 2). 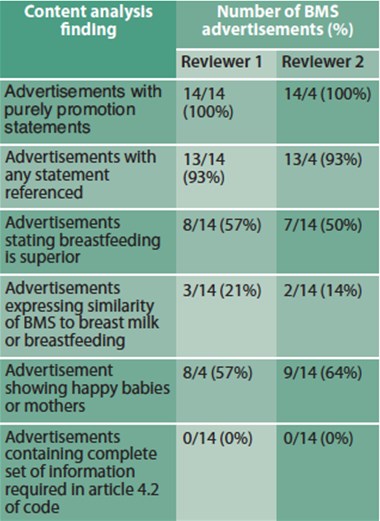 Although uncommon overall, in this study period BMS advertising was carried by leading clinical journals and, in particular, two leading child health journals, Archives of Diseases in Childhood (ADC) and ADC Fetal and Neonatal edition. Adverts also appeared in the British Medical Journal (BMJ), which had the highest print circulation in the UK (BMJ Group, 2013). BMS advertisements, therefore, have the potential to reach and influence many health professionals, especially those working in paediatrics.

Our second major finding of poor advert compliance with the Code is thus an important concern, given the documented deficiency in health professionals’ knowledge regarding breastfeeding (Brodribb et al, 2008; Freed et al, 1995) or the risks of BMS (Feldman-Winter et al, 2008; Schanler et al, 1999) and health professionals’ use of company materials for information, especially for specialist milks (McInnes et al, 2007).

We see two possible ways forward. At a minimum, journals should do more to screen and review BMS advertisements to ensure that they are fully compliant with the Code. A far better recommendation is that journals do not carry BMS adverts at all. The rationale for BMS advertising as an information source is questionable, given that there are many other opportunities for health professionals in the UK to access independent and comparative information about BMS products (Crawley & Westland, 2013).

In conclusion, it is encouraging that most journals carry limited/no BMS advertisements; however it is regrettable that existing adverts are poorly compliant with the Code. While health professionals need information on BMS, especially specialist BMS products, advertisements are unlikely to drive evidence-based best practice. Instead, an expansion of alternative sources of independent, in-depth information is needed, which would better empower health professionals to protect breastfeeding and, where BMS are indicated, to inform choices between the large variety of BMS available more accurately. Future research is needed to investigate how today’s journals compare with those reviewed in this study.

A final word: the struggle to publish

This project was originally carried out as an MSc project at UCL (SM). When we initially presented findings at UK conferences they were positively received, winning an oral presentation prize at one meeting. Publication has been more challenging, with our paper initially rejected by two of the journals which carried the most advertisements. While we acknowledge the limitations of our work (e.g. a limited number of journals reviewed; limited years sampled over our ten-year timeframe; an unavoidable element of subjectivity in assessing Code compliance; debates about how specialist milk advertising should differ from general BMS), we were surprised by the reason given by a final journal we submitted to. Despite editors sending our paper for review and (we believe) us addressing the relatively minor reviewer comments, we were unexpectedly told at the last stage that the paper was “beyond journal scope” – in spite of other articles on breastfeeding having been published previously. We wonder whether this in itself tells a story regarding the many complex issues around BMS marketing.

In 2016 the UK Royal College of Paediatrics and Child Health (RCPCH) voted to continue to accept funds from infant formula companies (Thornton, 2016), triggering important discussions as to the pros and cons of this stance (Costello et al, 2017). To what extent this vote might have been influenced by the ‘normalisation’ of BMS advertising in journals is of course unknown, but it is certainly one of many possible factors. Of note, ADC and ADC Fetal and Neonatal, the top two journals advertising BMS in our sample, are official journals of the RCPCH and go out regularly to all members and fellows of the College. In future research, we would be interested to review how many other professional associations (e.g. for midwives, dieticians, nurses and others with front-line patient contact) also carry similar advertising in member journals.

WHO. (1981). International Code of Marketing of Breast-milk Substitutes. Geneva WHO.

WHO. (1998). Evidence for the ten steps to successful breastfeeding. Geneva: WHO.

FEX: Violations of the International Code of Marketing of Breast-milk Substitutes: Indonesia context

Research snapshot1 Information and promotional materials produced by breast-milk substitute (BMS) companies and the distribution of free samples of BMS have a well understood...

“Commercial determinants of health” are an increasing problem for both national and global public health. Along with tobacco and pharmaceutical advertising, the...

FEX: Barriers to infant feeding in emergencies programming in middle and high-income countries

View this article as a pdf By Mija Ververs and Cindy Hwang Mija Ververs is a Senior Associate for the Center for Humanitarian Health at Johns Hopkins Bloomberg School of...

View this article as a pdf Lisez cet article en français ici This article describes recent initiatives that were taken to better regulate the marketing of breastmilk...

A paper and recently summarised editorial1,2 Violations of the International Code of Marketing of Breastmilk Substitutes have been previously reported in Field Exchange3. A...

FEX: Draft Guidelines for the Marketing of Ready to Use Supplemental Foods for Children

In the absence of guidelines to govern the marketing of ready to use supplemental foods (RUSFs), members of the UNSCN NGO/CSO constituency drafted a guidance to specifically...

INTRODUCTION 1.1 Infant and young child feeding Breastfeeding is one of the most cost-effective interventions to improve child survival. It is estimated that the scaling up...

en-net: I am planning to do a research on the impact of mass media on exclusive breastfeeding rates in Nigeria. What should be the duration of the Intervention before we can expect any change in EBF?

Substantial development in research on breastfeeding over the past three decades has been captured in a recent Lancet series on breastfeeding. Two papers in this series,...

FEX: Philippine Nutrition Cluster’s battle for the best: the breast

INTRODUCTION 1.1 Background Breastfeeding is the most cost-effective intervention to improve child survival. It is estimated that the scaling up of breastfeeding to a near...

NEW: Visit the IYCF-E HUB recently established in May 2021 for a global, comprehensive and interactive repository of essential IYCF-E resources! For a list of key IYCF-E...

Dr Bethou is a paediatrician currently based at the Mahatma Gandhi Medical College and Research Institute, Pondicherry, India and was one of the researchers in the study just...

FEX: Challenges in protecting non-breastfed infants in the Rohingya response in Bangladesh

View this article as a pdf Lisez cet article en français ici Alice Burrell is a public health nutritionist with five years of experience working in the nutrition...

By Suzanne Mboya Suzanne Mboya is a consultant nutritionist. In 2014 she completed a sixth month mission supporting the Syrian crisis IYCF-E response through a partnership...

Dear colleagues, You are invited to join us for the online launch of the 2020 Status Report on the National Implementation of the Code of Marketing of Breast-milk...

View this article as a pdf Research snapshot1 Interruption of exclusive and continued breastfeeding is responsible for nearly 700,000 maternal and child deaths annually....

As a result of concerns expressed about the usage of infant formula and a need for more information regarding weaning practices during and after the conflict in Kosovo, Action...