Abu Ahmed Shamim is the Nutrition Advisor (Consultant) at the Research and Evaluation Division of BRAC. He has previously managed nutrition programmes and research projects at the Bangladesh National Nutrition Council, CARE, Johns Hopkins University, FHI 360 and Helen Keller International.

Dr Rudaba Khondkar is the Country Director of GAIN, Bangladesh. She is a Medical Doctor with expertise in pediatrics and over 15 years’ experience in humanitarian and development with Concern Worldwide, Save the Children, UNICEF and BRAC in Asia, Africa and the Pacific.

The authors wish to acknowledge the financial and technical support of GAIN, Bangladesh. However, the views expressed are the responsibility of the authors and do not necessarily reflect the view of GAIN.

The writers also acknowledge the insights provided by Dr. Mahbubur Rashed, Ex Head of Programme, GAIN, Bangladesh, and the support of the District Coordinator (Sherina Akther), Shushilan Barguna and the field-team of the School Meal Programme Bamna Barguna.

What we know: School feeding programmes have the potential to improve child nutrition status, school attendance and achievements, and therefore to improve to future wellbeing and productivity.

What this article adds: In Bangladesh undernutrition is prevalent among schoolchildren as evidenced by indicators of underweight (42%), stunting (31%) and wasting (28%) in girls aged 5 to 10 years as well as deficiencies in iodine, vitamin A, iron, calcium and zinc. In a small cross-sectional survey, data were collected from mothers/caregivers in 71 households with children participating in an existing World Food Programme-supported pilot school midday meals (MDM) programme, versus 40 non-MDM households. Results revealed higher intakes of energy, calcium and vitamin A among MDM schoolchildren (although numbers are small and so should be interpreted with caution). Three focus group discussions with mothers/caregivers and local female vegetable growers (n=22) revealed perceptions of school meals as monotonous, with demand for a wider variety of nutritious foods. New menus were developed at the same/similar cost to provide approximately 30%, 39%, 30%, 56%, 43%, 32% and 14% of recommended daily allowance (RDA) for dietary energy, protein, fat, iron, zinc, vitamin A and calcium, respectively. These new menus now require field testing.

Early-life malnutrition is reported to have long-term consequences. Improvements in height-for-age in pre-schoolers are linked with increased height as young adults and increased number of school grades completed (Alderman et al, 2006). A recent review commissioned by the World Bank and World Food Programme (WFP) reported that school feeding programmes increase school attendance, cognition and educational achievement, particularly if supported by complementary actions such as deworming and micronutrient fortification or supplementation (Bundy et al, 2009).

In response to such evidence and prevalent undernutrition, the Government of Bangladesh (GoB) and WFP launched a school feeding programme (SFP) in 2002, through which fortified biscuits were distributed to primary schoolchildren in poverty prone areas of Bangladesh to improve child nutrition status. To complement this initiative, a partnership was formed in between GoB, Global Alliance for Improved Nutrition (GAIN) and Dubai Cares in 2011 to implement a pilot School Nutrition Project (SNP) in both rural and urban areas of Bangladesh to provide cooked midday meals (MDM) in primary schools.

A ‘cluster kitchen model’ was used whereby one basic kitchen provided a meal (often ‘khichuri’, made from rice, lentils or other pulses with added vegetables) to 1,500 to 2,500 students from five to six schools, using domestically produced and locally available ingredients cooked on traditional stoves. This model reduced dependence on electricity and ensured quicker delivery of food (within 40 to 60 minutes) compared to a large, centralised kitchen; avoided the need to build kitchen extensions in schools; reduced costs per school of kitchen workers; and avoided disturbing schoolteachers from their primary duty of teaching. Research showed that the nutrition status of children in participating schools, as well as school enrolment and attendance rates, improved significantly (Afroze & Tukun, 2014). The WFP supported programme continues to run in selected areas of Bangladesh and the GoB is now formulating a national school feeding policy and a plan for scale-up. To inform this process, GAIN conducted the current study to develop an acceptable and cost-effective MDM menu, taking into consideration the menus from the pre-existing programme. 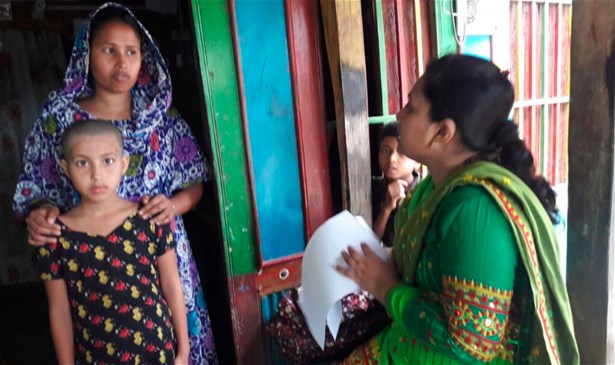 A literature review was conducted to investigate the prevalence of undernutrition and micronutrient deficiencies of Bangladeshi primary school-age children. A pilot study that included a cross-sectional survey was then carried out among 111 mothers and caregivers in 71 pilot MDM households (of randomly selected students from a primary school in Bamna, sub-district of Borguna district, with the MDM programme) and 40 non-pilot households (of students from the nearest school from the adjacent sub-district with no MDM programme) to estimate energy, calcium and vitamin A intakes using the 24 hour-recall method1. Three focus group discussions (FGDs) (with 22 participants in total) were conducted with groups of mothers and caregivers of students attending MDM schools and local female vegetable suppliers of the MDM programme to gather their opinions on alternative MDM menus within the same budget.

Intakes of energy, calcium and vitamin A among schoolchildren in pilot MDM households were higher than in non-pilot households, although the differences were small (hence figures are not presented) and the result should be interpreted with caution due to the small number of children included in the study. Field findings also suggested that a typical home breakfast and lunch of a child provides about 28-32% of dietary energy in both pilot-MDM and non-MDM households.

When the mothers or caregivers of schoolchildren were asked about their opinion regarding the school meal currently being provided, 52% expressed dissatisfaction with the taste of the meal, while being satisfied with the amount of food served and its nutritional quality. When asked about the benefits of the MDM, 44% of caregivers mentioned that it helped to reduce child hunger; 27% mentioned that it helped to reduce family costs; and 22% mentioned that it improved child health. Results revealed that 66 % of schoolchildren ate most of the meal provided, but 34% did not consume the meal regularly as they felt it was monotonous (100%) and not tasty (28%).

There was agreement among all participants in FDGs that school meals in the existing MDM programme are monotonous. Almost all (96%) mothers and caregivers of schoolchildren suggested the inclusion of eggs in the school meal as affordable, nutritious and acceptable foods for children; 82% of mothers also suggested milk and 73% suggested vegetables. Other suggestions for alternative menus included boiled rice, fried or curried egg, smashed or fried potato, fried or curried fish, bread, banana and other seasonal fruits. They also suggested these items to be served alternatively with khichuri and biscuits to further avoid monotony.

Taken together, the findings from this pilot project suggest that the menu provided at school should be at least equal to a typical lunch or breakfast that a child receives at home (~30% of dietary energy). Otherwise if a school meal replaced a typical home meal, it can plausibly be assumed that the overall nutrient intake could be lower. The exercise also revealed that the menu should be nutritious, tasty, varied and acceptable to the children to increase uptake. Results also show that mothers and workers implementing school meal programmes may provide valuable insight in planning menus.

Based on these results two weekly rotational menus were developed; one at the same cost as the existing programme and the second at a 15% additional cost (shown in Table 2). This menu would provide approximately 30%, 39%, 30%, 56%, 43%, 32% and 14% of RDA for dietary energy, protein, fat, iron, zinc, vitamin A and calcium, respectively. 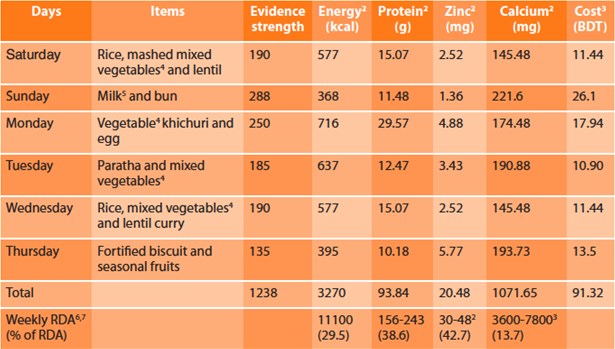 Alternative healthy menus are proposed for school lunches in Bangladesh, based on the results of a literature review and field study in the context of a pilot school meals programme. The GAIN meal-based school feeding project generated valuable learning which should be used in the process of planning the future national school meals policy and programme, such as the use of the cluster kitchen model. The field survey covered too small a sample size to measure statistically significant differences, but provided insights that complemented interviews and FGDs with caregivers and mothers. These indicated the need to create more varied and acceptable meals to increase uptake. The new menus identified through this pilot project can be plausibly expected to be more acceptable to children and consequently more effective in increasing child nutritional status. Findings must now be field tested before implementation at scale.

1Iodine, zinc and iron intake from iodized salt and iron- and zinc-fortified rice were not estimated.

7Upper values were used for calculation.

Shariqua Yunus Khan is a medical doctor and a public health practitioner currently managing the nutrition portfolio at the India office of the World Food...

FEX: Delivery of maternal nutrition interventions at scale and mainstreaming into the health system in Bangladesh

FEX: Designing a food plate for dietary counselling of pregnant women in Bangladesh

Combining a mid-day meal, health service package and peer support in Karnataka State, India View this article as a pdf Uma Mahadevan is Principal Secretary in the Department...

NEX: Community kitchens in Lebanon: Cooking together for health

Joyce Barakat is the Food Security Programme Coordinator at International Orthodox Christian Charities (IOCC) in Lebanon. She has a BSc in Biology and Premedical Studies from...

View this article as a pdf Lisez cet article en français ici By Diane Baik Diane is a Technical Adviser for Health and Nutrition with the Technical Services...

By Greg Sclama View this article as a pdf Lisez cet article en français ici Gregory Sclama is an Assistant Professor of International Development and Economics at the...

Based on the nutritional information of the two products, there is no difference in nutritional composion (energy,protein, Fat, and micronutritient) except plumy nut has animal...

By Sophie Goudet Sophie is a nutritionist with over nine years experience with international agencies in nutrition and health within developing countries. Her research...

FEX: The importance of school feeding programmes to support the nutrition of school-age children, particularly during the COVID-19 pandemic

FEX: Maternal nutrition interventions in Bangladesh: delivery at scale and mainstreaming into the health system

This is a summary of a Field Exchange field article that was included in issue 63 - a special edition on child wasting in South Asia. The original article was authored by...

NEX: The nutrition-sensitive potential of agricultural programmes in the context of school feeding: Lessons from Haiti

Summary of Field Exchange 51 article by Nathan Mallonee, Jason Streubel, Manassee Mersilus and Grace Heymsfield Haiti is the poorest country in the western hemisphere, with...

Summary of research1 The major cause of anaemia in pregnancy is iron deficiency, which is preventable. It is estimated that 56% of pregnant women in developing countries...

News By Dr Erick Boy, Nutrition Head, HarvestPlus Dr Erick Boy is a public health practitioner and has a doctoral degree in nutrition from University of California, Davis. He...

View this article as a pdf Vanessa Oddo is an Assistant Professor in the Department of Kinesiology and Nutrition, University of Illinois Chicago. Airin Roshita is a Nutrition...

FEX: The importance of school feeding programmes, particularly during the COVID-19 pandemic

This is a summary of a Field Exchange views article that was included in issue 66. The original article was authored by Maree Bouterakos, Michele Doura, Mutinta Hambayi and...