Ibrahim Mohammed is a lecturer in the Public Health Programme of Samara University, Ethiopia

In Ethiopia, undernutrition remains a critical issue with current national estimates suggesting that the prevalence of stunting (36.8%), underweight (21.3%) and wasting (7%) in children 6-59 months of age is among the highest in sub-Saharan Africa (EMDHS, 2019). In Afar Regional State, situated in the north-eastern part of the country, undernutrition rates are estimated to be some of the highest in Ethiopia according to the most recent EMDHS (2019), with stunting, underweight and wasting prevalence estimated to be 42.2%, 31.1% and 13.5% respectively.

The prevalence of child undernutrition is not consistently documented at subnational level and the reasons for these high prevalence estimates in Afar have not been explored in recent research. Natural and manmade disasters, including a recurrent drought and ongoing conflict, being faced in the region have been noted as reasons for high food insecurity and child malnutrition rates (DPFSPCO & NDRMC, 2021). Given these factors, Ethiopia has classified the region as a ‘hotspot’ area, prioritising it for various nutrition-specific and nutrition-sensitive interventions. To offer the most appropriate intervention strategies, it is important to consider the underlying causes and risk factors for malnutrition in this region.

Previous studies in Ethiopia and many other countries have found that maternal characteristics (maternal education, maternal autonomy and maternal height and weight) are important factors that influence a child’s nutrition status. However, the influence of maternal employment status is less clear with mixed results previously being reported in the country (Eshete et al, 2017 & Wondafrash et al, 2017). Women entering the workplace has shifted childcare roles and responsibilities with potential impacts on breastfeeding, complementary feeding, food preparation and healthcare seeking behaviours. On the other hand, increased household income is likely to have a positive effect on diet diversity and access to nutritional foods (Wondafresh et al, 2017). Given these mixed results to date, this study wanted to further explore the role of a mother’s employment in nutrition status in this hotspot area. Specifically, it aimed to assess the nutrition status and associated factors among children 6-59 months of age of both employed and unemployed mothers in Abala town, Afar Regional State, Northeast Ethiopia. 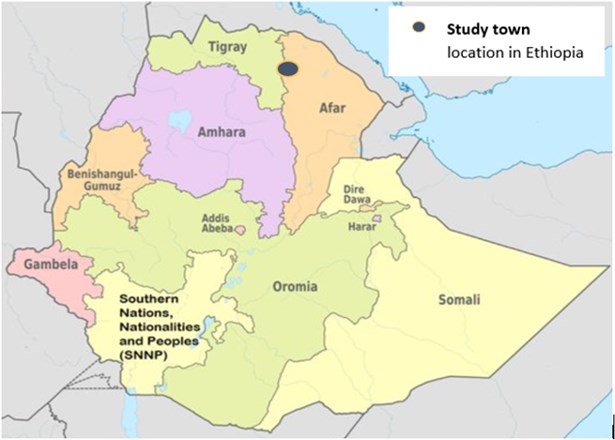 Abala is a town in north-eastern Ethiopia bordered on the west by the Tigray Region. Abala is in the administrative centre of Afar, with Abala town having a total population of 56,245.

Women’s employment levels have been steadily rising in the town, particularly following Government employment reforms which came into effect in 2019. To understand how this increase in women’s employment could impact the nutrition outcomes of children, we conducted a survey in Abala Town. We hoped that the findings of this investigation would potentially provide an important initial step to determining how to mitigate nutrition challenges in the region.

The study aimed to:

We used a community-based cross-sectional survey that comprised mother-child pairs from both employed and unemployed mothers. This study was carried out from 29th March to 27th April 2021. The definition of employment was kept broad and included formal, informal, regular and casual employment. A mother was considered as employed if she reported earning income in the previous six months.

Five kebeles (the smallest administrative unit in Ethiopia) out of a total of 11 kebeles in the town were randomly sampled and a study questionnaire was developed and translated into the local language (Afar-afa) for data collection. The questionnaire explored demographic and socioeconomic factors, maternal employment status, childcare practices, health and food-related characteristics (dietary diversity, child illness, immunisation status) and anthropometric measurements (weight and height, mid upper arm circumference and oedema). Interviews were conducted face-to-face using a structured interview guide and anthropometric measurements were converted into weight-for-age z-scores), height-for-age z-scores and weight-for-height z-scores according to World Health Organization child growth standards (WHO, 2006).

Independent sample t-tests were used to compare the children of employed and unemployed mothers based on the prevalence of wasting, stunting and underweight. Bivariate and multivariable logistic regression analyses were used to predict factors associated with child nutrition status (stunting, underweight and wasting). The strength of statistical association between the outcome and predictor factors was measured by adjusted odds ratio (AOR) with 95% confidence intervals (CI) in the final model. Significance was set at a level of 0.05 (5%). 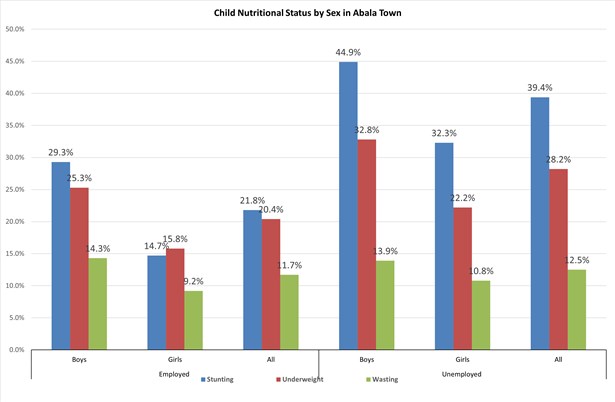 Confounders (confounding factors) that were considered and input into the logistic regression model for stunting: family size, presence of latrine, place of delivery, timely introduction of complementary feeding.

The overall nutrition status (stunting, wasting and underweight) of children aged 6-59 months of employed and unemployed mothers was found to be 39.5%, 12.1% and 24.3%, respectively, which is comparable to findings from the most recent EMDHS 2019 for the region.

The results of this study showed that a higher prevalence of stunting and underweight were observed among children of unemployed mothers compared to employed mothers. However, maternal employment did not seem to have an impact on the risk of becoming wasted. The association between maternal employment and stunting and underweight is likely explained through economic gain having a positive impact on children’s dietary intake over the longer term. Similar findings were noted in a study exploring the topic although interestingly are in contrast with a study from Central Ethiopia where unemployment was found to impact wasting as well as stunting and underweight prevalence (Wondafrash et al, 2017).

Limitations of the study

As the study involved a single cross-sectional design, the factors explored cannot be attributed to causing undernutrition in this study population. There might be the possibility of recall and reporting bias in some infant and young child feeding indicators such as breastfeeding patterns, dietary diversity scores and a child’s history of illness.

This study indicated that the employment status of mothers has an association with nutrition status (particularly stunting and underweight) among children aged 5-69 in Abala town. Thus, improving mothers’ opportunities for employment appears to be an important intervention to improving the nutrition status of children aged 6-59 months in this study region, while at the same time ensuring flexible workplace conditions that preserve optimum infant and young child feeding practices.

1 Of the total 723, 12 children were excluded from the study due to SMART flags for height-for-age z score

2 Chi-squared testing revealed that there was no statistically significance difference between girls and boys in the sample. Boys (52.6%) and girls (47.4%) equally represented (p= 0.169)

FEX: Maternal profiles and social determinants of severe acute malnutrition among children under five years of age: A case-control study in Nepal

View this article as a pdf Research snapshot1 Malnutrition remains a major public health issue in Nepal and is estimated to be the underlying cause of 50% of child deaths. An...

Summary of research* Location: South Africa What we know: Stunting is an indicator of chronic undernutrition and is often linked to poverty-related factors. There is mixed...

View this article as a pdf Research snapshot1 The burden and risk factors for wasting among infants under six months of age in India are not well documented. Data from...

FEX: Impact of a conditional cash transfer programme on determinants of child health in Colombia

FEX: Diarrhoea risk associated with not breastfeeding in Botswana

FEX: Factors associated with stunting among pre-school children in Tanzania

Research snapshot1 Stunting is a major public health problem in Africa, affecting more than one third of children under five years (Black et al, 2013). In Tanzania in 2014,...

FEX: Analysis of trends in SMART nutrition survey data from South Sudan between 2004 and 2016

View this article as a pdf Research snapshot1 Despite decades of nutrition and health interventions, emergency levels of global acute malnutrition (GAM) persist in former...

Summary of published research1 A recently published study assessed the contribution of the timing of initiation of breastfeeding to neonatal death. The study also set out to...

By Susan Thurstans Susan is a registered nurse and midwife with over 12 years' experience in maternal and child health and nutrition programmes in both development and...

View this article as a pdf MSc summer project1 By Mphatso Nancy Chisala Mphatso Chisala is a medic by profession with an interest in the prevention and treatment of child...

FEX: Relationships between wasting and stunting and their concurrent occurrence in Ghanaian pre-school children

Summary of research* Location: Ghana. What we know: Wasting is a short-term health issue, but repeated episodes may lead to stunting (long-term or chronic malnutrition). This...

View this article as a pdf This article features a snapshot of the burden of concurrent wasting and stunting in Angola using prevalence data from survey data in two...

Summary of research1 Location: Ethiopia What we know: Rapid economic growth in developing countries has had a mixed effect on human development; the impact on reducing...

FEX: An overview of REST’s implementation of the Productive Safety Net Programme

View this article as a pdf Research snapshot1 A Paediatric Development Clinic (PDC) in rural Rwanda provides a medical home model for the medical, nutritional and...

Summary of research* Location: Malawi What we know: Little is known about the long-term health effects of survivors of severe acute malnutrition (SAM), particularly risk of...

Summary of research1 On the basis of the latest WHO criterion for HIV treatment initiation (CD4 cell count =350 cells/mm³), anti-retroviral therapy (ART) was accessed by an...