Sebsibie Teshome is a humanitarian nutritionist with over 15 years’ experience in national and international emergency and development contexts, including in Ethiopia, South Sudan, Yemen, Mozambique, Iraq and Nigeria. He is currently Nutrition Adviser in the Humanitarian Surge Team at Save the Children UK.

Daniel Hadgu Takea has worked as a public health nutritionist for over 15 years in Ethiopia, Pakistan, Yemen, Nigeria, South Sudan, Kenya, Mozambique and Iraq on emergency humanitarian response and capacity building. He is currently continuing his education in the UK.

The findings, interpretations and conclusions in this article are those of the authors and do not necessarily represent the views of USAID/OFDA, UNICEF or others.

The conflict between armed groups in Iraq has had profound humanitarian consequences; by 2016 nearly ten million people were in need of humanitarian assistance and around 188,000 people were displaced. The Nutrition Cluster was not formally activated in the Mosul emergency response; instead, a Nutrition Technical Working Group (NWG) was established within the Health Cluster. The NWG was suspended in April 2016 (due to the departure of the UNICEF-engaged nutrition specialist leading it) and reactivated on December 14 2016 following the deployment of a Nutrition Cluster Coordinator from the Global Rapid Response Team (RRT).1 Clearly, this lack of continuity has implications on the quality and speed of emergency response, with preparedness diminishing if the structure that was established is not maintained.

A nutrition assessment adviser, a social behavioural change (SBC) adviser and an infant and young child feeding in emergencies (IYCF-E) adviser were deployed by the Tech RRT mechanism at the request of UNICEF Iraq to provide surge support for UNICEF, the Ministry of Health (MoH) and nutrition partners. The Tech RRT assessment adviser was deployed in the third week of November 2016 for 11 weeks. The Tech RRT SBC and IYCF-E advisers were deployed in the first week of December 2016 for nine weeks. Details of the assessment deployment are included in this issue of Field Exchange. The experiences of the IYCF-E and the related SBC deployment are shared below.

The Tech RRT SBC adviser supported the MoH and UNICEF by conducting barrier analysis surveys on infant and young child feeding (IYCF) in eight internally displaced persons (IDP) camps to feed into an SBC strategy. Training was also provided on barrier analysis for health workers from MoH and nutrition partners (Samaritans Purse and the World Food Programme (WFP)). The survey revealed that the main barriers to optimal IYCF practices were birth complications, perceptions of insufficient breast milk, maternal stress and sickness (as barriers to breastfeeding) and mother’s workload, infant sickness and concerns about infant overweight (leading to sub-optimal complementary feeding practices). Recommendations included skilled breastfeeding support by birth attendants and, in the community, a referral system for women with breastfeeding difficulties, dissemination of key IYCF messages to support optimal practices and community cooking demonstrations. An SBC strategy for IYCF was developed based on these findings. (To access these documents, go to http://techrrt.org/past-deployments/).

Informed by the work of the Tech RRT SBC adviser, the Tech RRT IYCF-E adviser provided technical support on advocacy, capacity building, development of IYCF action plans (to provide support for breastfed and non-breastfed infants), and development of guidelines for the management of breastmilk substitutes (BMS), particularly in the camp setting. Health workers from MoH and nutrition partners were trained on IYCF-E to provide support for breastfed and non-breastfed infants in the IDP camps. A workshop was also held to create awareness among different sectors of the importance and integration of IYCF-E into sectors such as water, sanitation and hygiene (WASH), health and food security. 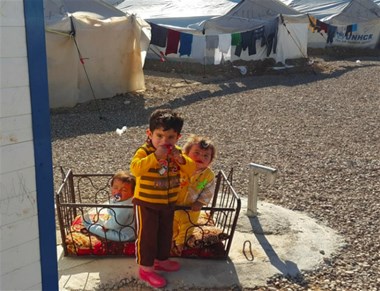 A key challenge to this deployment was the many, long-existing barriers to optimal IYCF practices in this context, including low prevalence of exclusive breastfeeding in Iraq pre-crisis (19 per cent, MICS 2011), low early initiation of breastfeeding (42.8 per cent) and high bottle-feeding prevalence (37 per cent). Infant formula had been included in public food distributions for more than 20 years; untargeted distribution only ceased in February 2017 after successful advocacy from United Nations (UN) agencies and international non-governmental organisations (NGOs). The International Code of Marketing of Breast-milk Substitutes legislation (incorporated in 2015) is poorly enforced. Emergency response within this bleak IYCF panorama is nearly an impossible feat, emphasising the role of development programmes that lay the foundation that can be built upon when the crisis hits.

The deployment of Tech RRT advisers was timely to provide technical surge support. However, despite a dedicated NWG within the Health Cluster, nutrition was not prioritised and nutrition/IYCF activities, indicators and budget lines were not included in the 2016 or the 2017 Humanitarian Response Plan (HRP). This was quite shocking given the poor IYCF landscape and compared to contexts with a formally activated nutrition clusters. Furthermore, few partners were implementing nutrition programmes, likely due to its absence in the HRP and the consequent lack of funding for them. Thus the benefit of anticipated collective deliverables and objectives was mostly limited to UNICEF and the Directorate of Health (DoH). While breastfeeding support programmes were established in IDP camps (DOH/UNICEF/Samaritans Purse), there was a gap in programmes for the management of BMS for non-breastfed infants.

An SBC strategy was critical to respond to IYCF barriers identified in the survey; however this was hampered by the fact that the SBC IYCF approach designed prior to deployment was not context-specific, so adapting it to suit the context took more time than anticipated. There was also a lack of capacity among stakeholder staff to implement SBC.

Other practical challenges faced in this deployment were the unavailability of nutrition coordination staff (staff were at times unable to participate actively due to the nature of the crisis) and the time it took to build consensus on priority technical support; with three technical experts requested at once, more coordination was required, which was further constrained by limited coordination by the NWG and overwhelming emergency needs.

UNICEF has since hired a full-time nutrition specialist that is now based in Erbil, Iraq, who is working on IYCF issues.

1The RRT is the result of a partnership between the Global Nutrition Cluster (GNC) and five GNC partners that aims to support cluster coordination and information management through rapidly deployable Nutrition Cluster Coordinators (NCCs) and Information Management Officers (IMOs).